Hua Ma Cave is classified as a scenic area in the region Ba Be National Park. One of the mysterious and attractive caves for tourists to come here. This is also one of the must-see destinations of Bac Kan tourism.

Over the years, in 2004, Hua Ma Cave was put into operation by the Department of Culture, Sports and Tourism of Bac Kan province and Ba Be National Park Management Board, turning Hua Ma into a destination for tourists. near far.

With an altitude of 350m above sea level, from the foot of Co Don mountain, visitors follow the stairs on the gently sloping mountainside to the cave gate. Hua Ma Cave has a length of more than 700m, the ceiling of the cave is 40-50m wide and high, containing many magnificent shimmering walls and stalactites. Stepping into the cave, the open space due to the wide and interconnected heart of the cave has created a cool and comfortable feeling for visitors.

As a beautiful and magnificent cave, the service of tourist elements here has not been really taken care of. Even so, Hua Ma Cave is still worthy of being the first wonder of Ba Be cave

The cave is located on the Leng river and belongs to Pac Ngoi village, Quang Khe commune, Ba Be district, Bac Kan province. Hua Ma Cave is located on Co Lon mountain in the middle of Leo Pen (Ghost Forest) area with green and dense trees. Hua Ma Cave is deeply rooted in the mountain in the east-south direction, so it is quiet all year round, so it is also called Leo Pen Cave by local people.

In the middle of the mountain, there is a strange cave deep in the mountain running in the direction of East - South. Locals call it Leo Pen Cave, associated with an extremely sacred and very strange legend.

People living here recount that it is said that Ghost Forest was once a place where ghosts resided. Every evening, the howling sound from Hua Ma Cave resonated, causing a shock in the whole area until late at night, people in the area did not dare to travel at that time.

That day, there was a court general who was patrolling here, and when he reached the banks of the Leng River, it was almost dark. The group of horses was about to go to the next village to rest, but strangely, when crossing the Leng river, every time they reached the water, the horses turned back, neighing as if signaling something unusual.

At the same time, from the side of Leo Pen Cave, the howl, the sound of the soul crying and crying came out. Seeing the strange thing, the military officer called the villagers to ask, and learned that the cry was the souls of the militiamen who had joined the court to fight the enemy. They were entrenched in the Cave. The invaders could not do anything and closed the cave door, so the unjust souls could not escape.

Understanding the situation, the military officers camped right next to the Leng River and slaughtered horses, taking the horse's head as a sacrifice to heaven and earth. Strangely, when the sacrifice was just finished, the sound of the ghosts in the cave also gradually quieted and disappeared, where over the years, there have been very special and magnificent stalactites, in some places like stone flowers, in other places like Buddha. Bodhisattva Guanyin sent off the teachers and students of the Tripitaka to get the scriptures, in some places it was like an aquarium or a palace in the "Treasure meeting".

Since then, people called Son Cave "Lèn Pen" which is Hua Ma Cave or in the local language called Horsehead Cave, to remember a mysterious and legendary story of the land and people here.

1. The entrance to Hua Ma Cave

The road to the cave has been built into steps, leading directly to the gate of Hua Ma Cave, 3m wide and 5m high. The entrance is on the east side and the exit on the south side.

The right side of the main door has been filled with stones stacked on top of each other, this is still a mystery and there are many different explanations, and locals believe that it is due to an old legend. From the gate of Hua Ma Cave looking down is a blue water of the forest and Ba Be Lake along with the Leng river flowing through.

Stepping inside, Hua Ma Cave opens wide, about 1ha with a length of more than 700m, the ceiling of the cave has a height of 40-50m. The slope of the cave is gentle, there is a place to create a wall of 3m high, below there is a giant rock dump about 164m long, the width of the smallest place is also 10m, the widest place is up to 43m.

The background of Hua Ma Cave is quite flat, dry, and the edges are curved like beautiful terraced fields. About 15m from the entrance of the cave, is the place where pottery tools with patterns of the Le Dynasty were discovered.

In the middle of the cave, there are dozens of 10-15m stone columns rising high, elaborately "carved" by the creator's hand. Covering the cave are countless stalactites of various shapes, evoking rich imagination such as flowers, pen towers, Quan Am lotus stands, scenes of teachers and students of Tripitaka going to collect scriptures, or jutting out of the rock like a day. The Iron Dynasty has a lot of literature and martial arts... Depending on the imagination of each person, each stalactite appears with a different appearance. The white and black stalactites glisten with shimmering colors from above the cave hanging down, rising from the ground, creating a very interesting feeling.

The corridor of Hua Ma Cave is also divided into many rooms by natural separating stone curtains and stalactites.

Hua Ma Cave has become one of the must-see highlights of Bac Kan tourism. 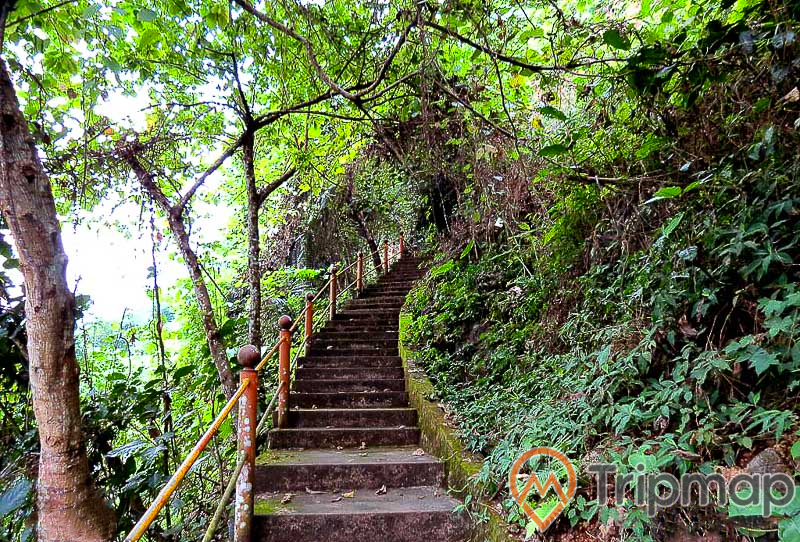 The entrance to Hua Ma Cave

Steps to climb to Hua Ma cave to explore 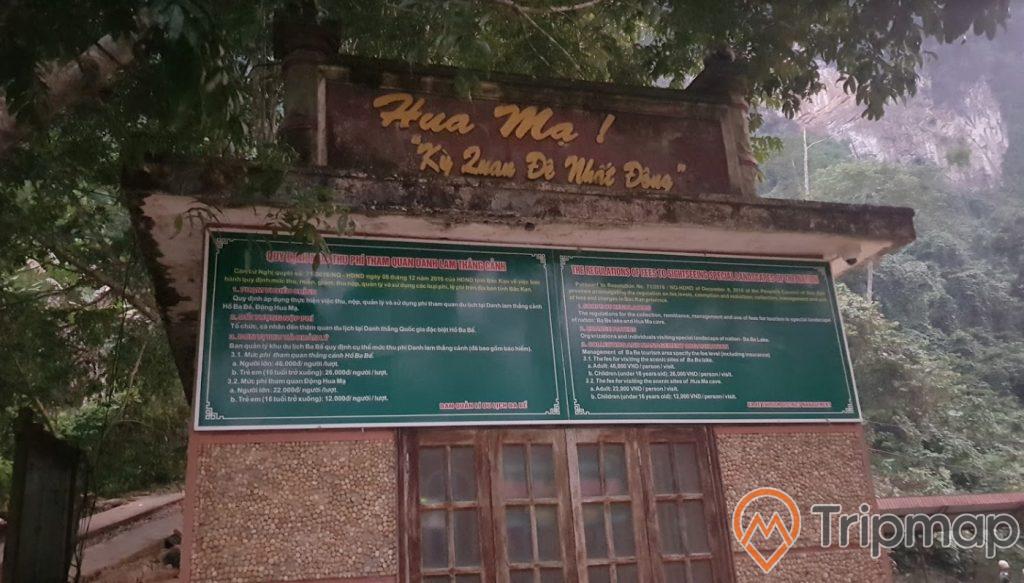 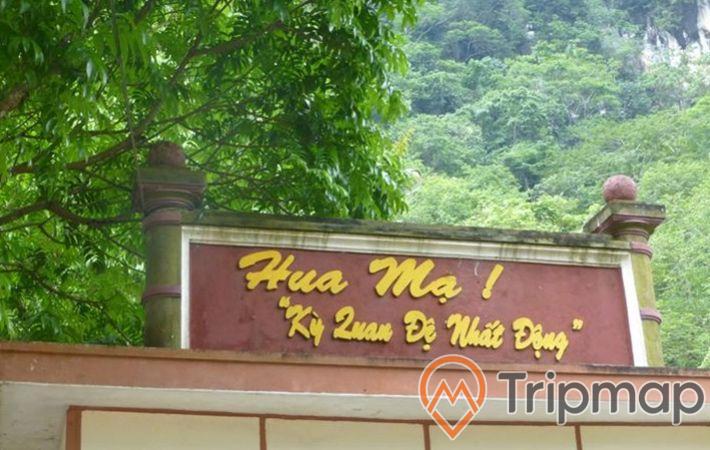 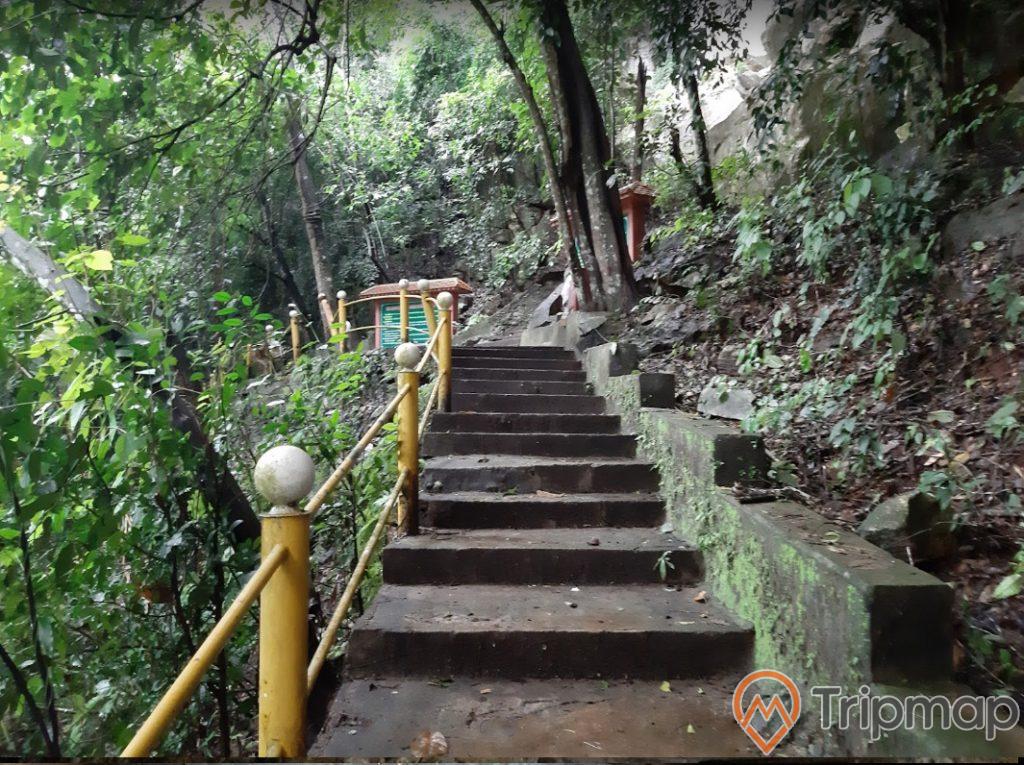 The stairway to the entrance of Hua Ma cave

Steps to climb to the campus near Hua Ma cave entrance 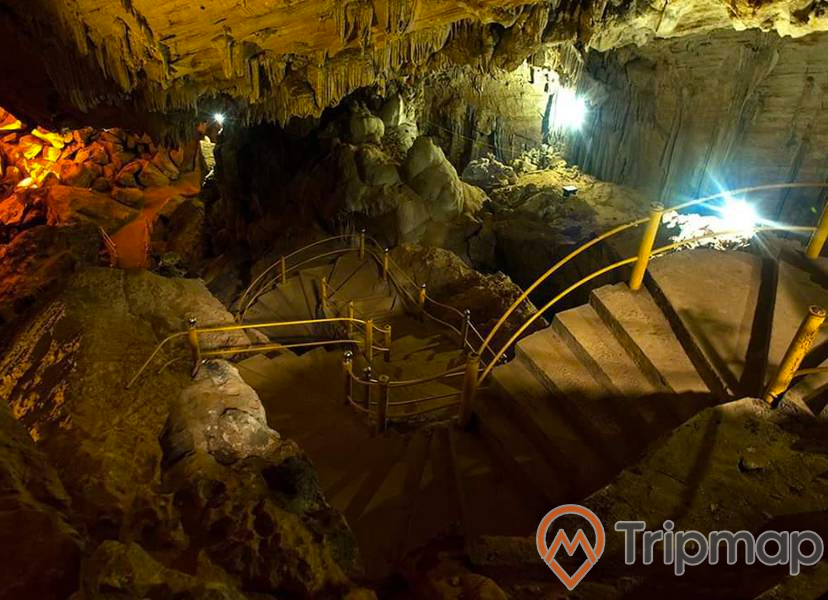 Staired walkway for visitors to visit the inside of the cave 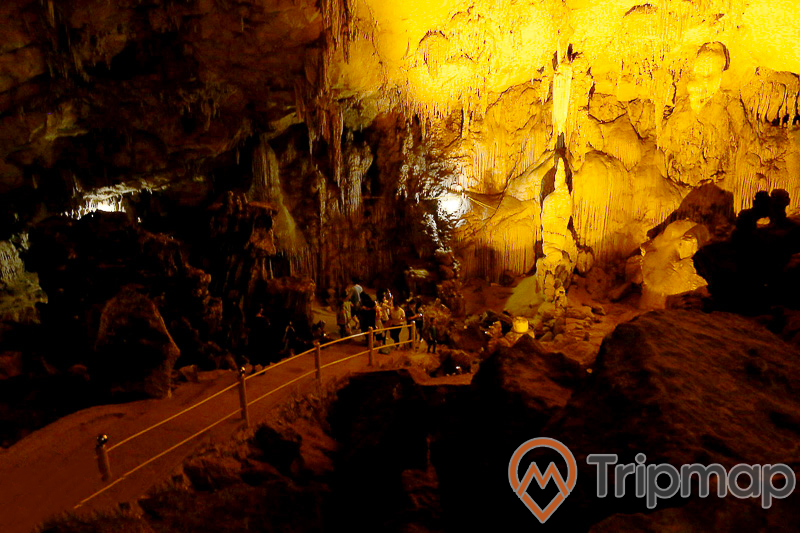 The space inside Hua Ma Cave 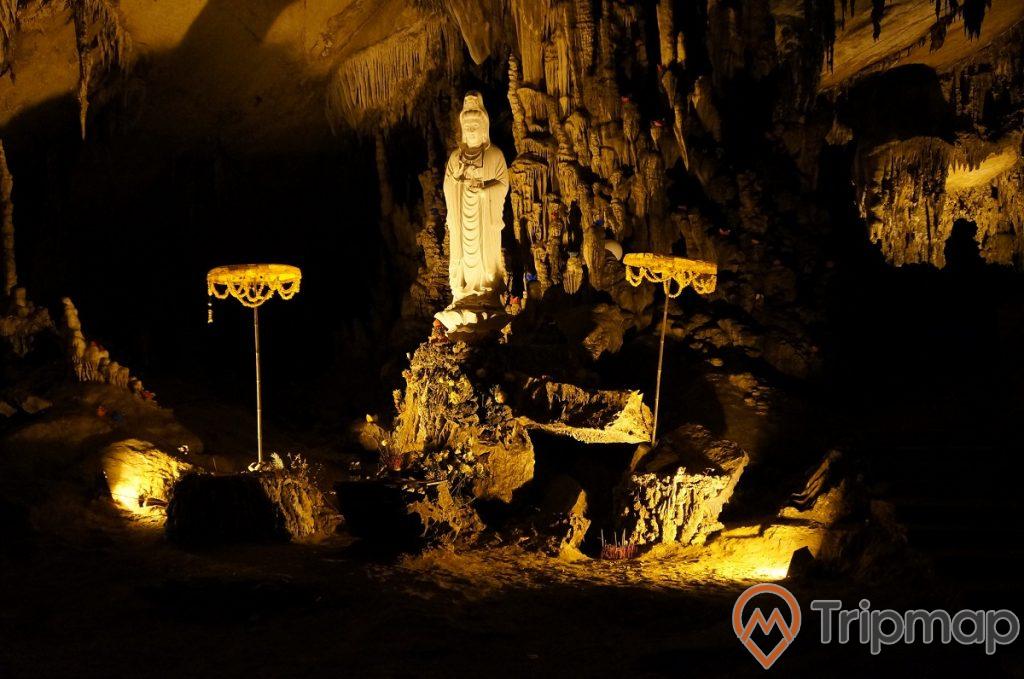 This is the area of ​​worship inside the cave 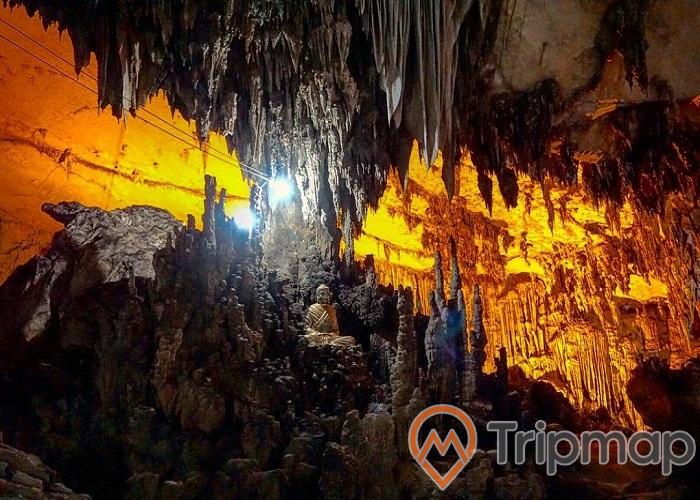 The statue in the middle of Hua Ma Cave

Inside the cave, there is a Buddha statue placed in the middle of the stalactites 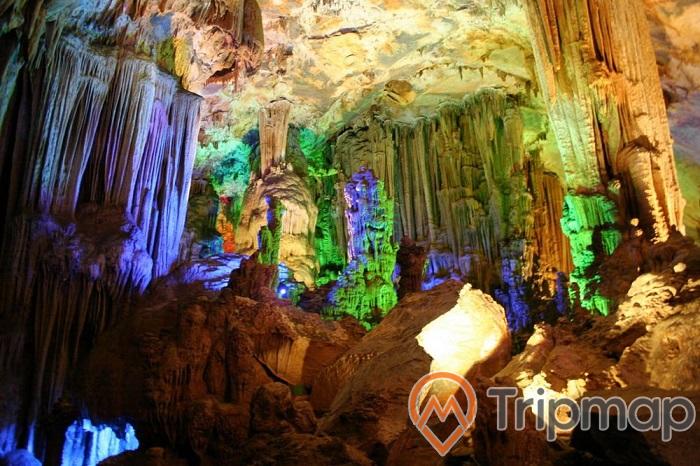 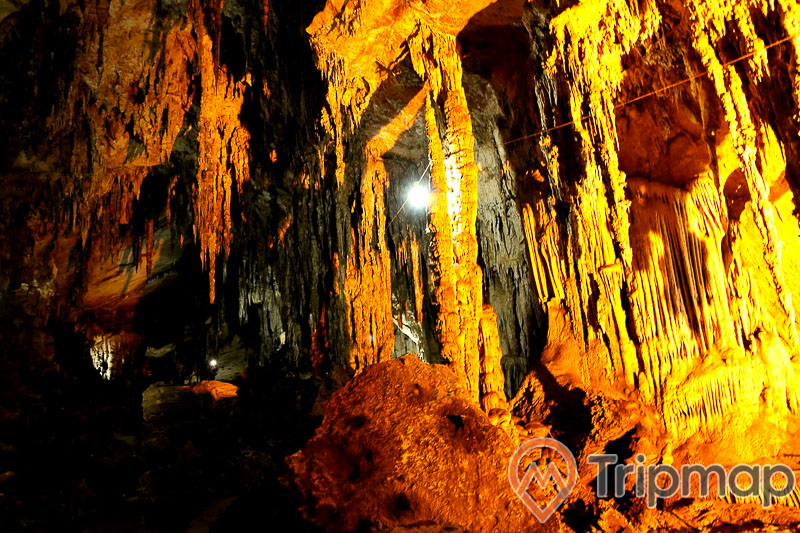 Hua Ma Cave is located in the middle of Lone Mountain 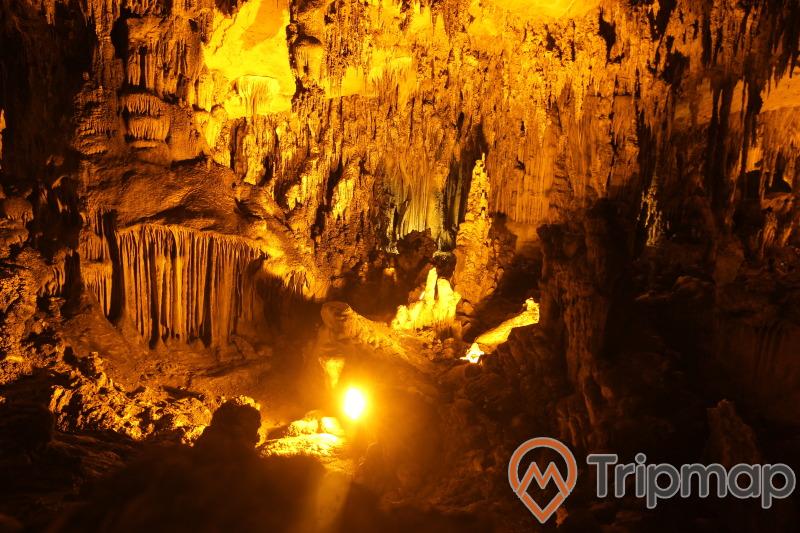 Inside the cave, there are so many beautiful frames that you can't take your eyes off 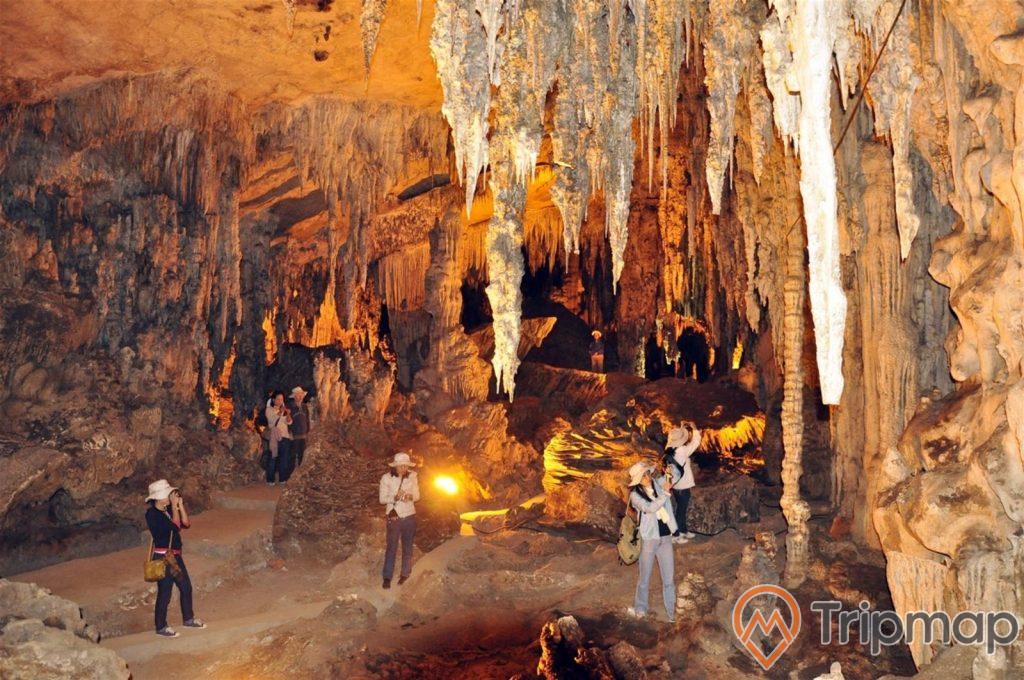 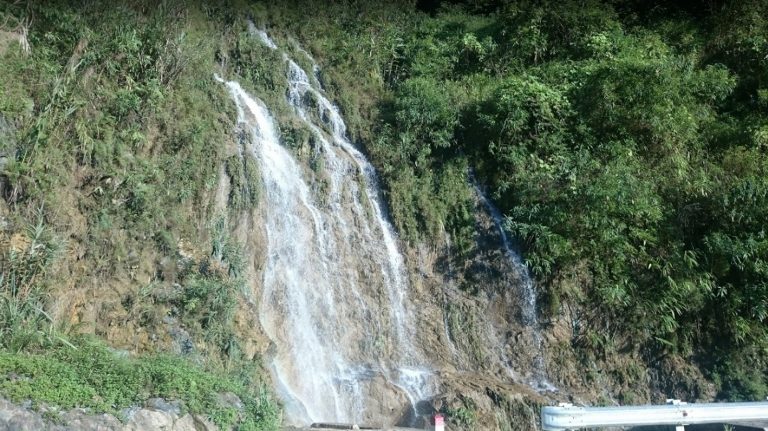 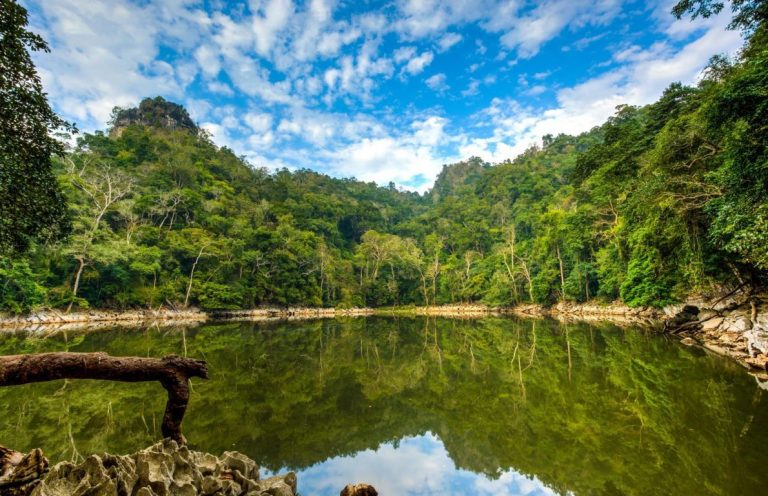 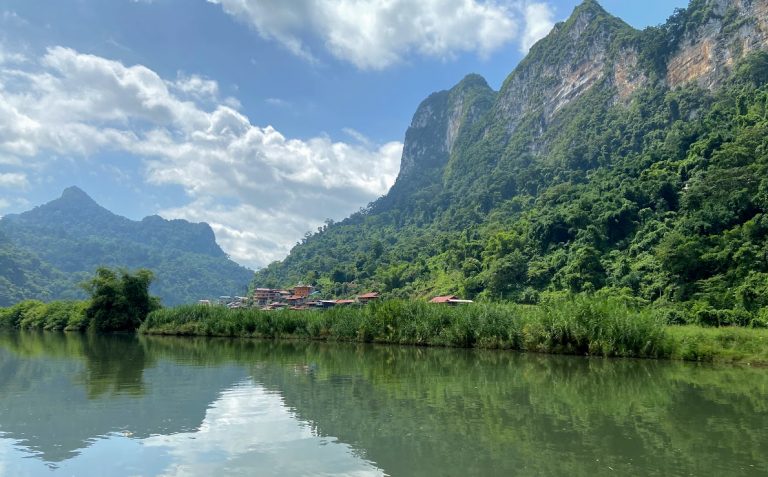 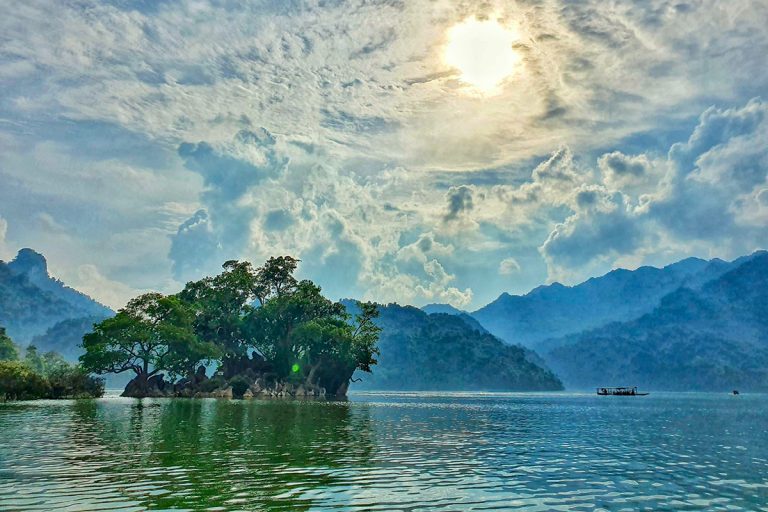 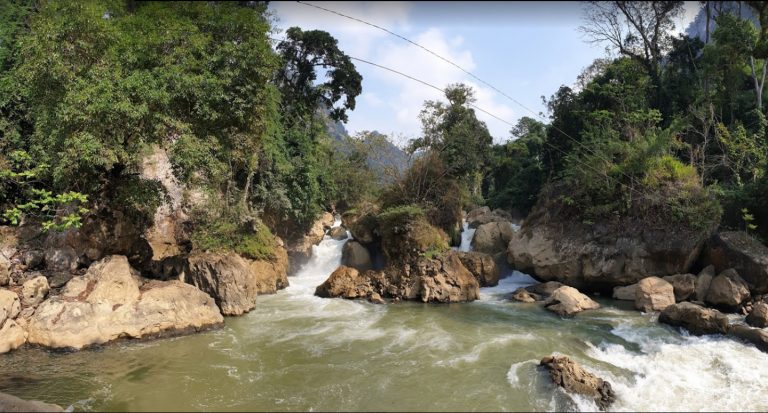 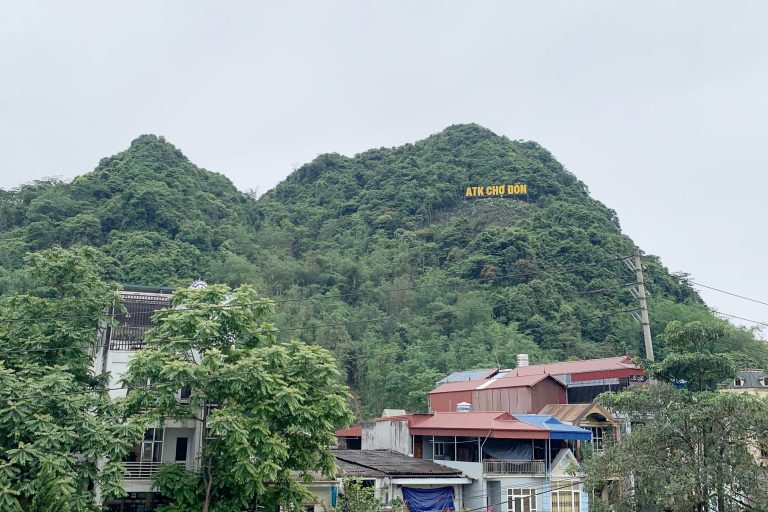 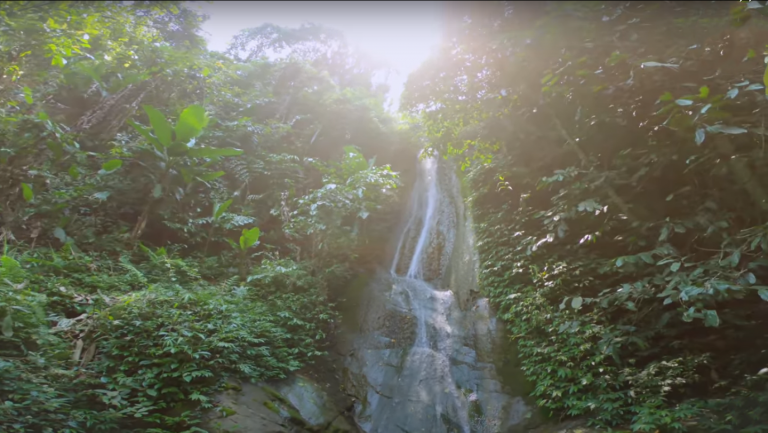