Vung Tau tourism is increasingly attracting tourists near and far because it possesses charming natural scenery, many good cultural features of the nation. In addition to enjoying the beautiful scenery from the sea, mountains and forests, this place also has spiritual destinations, containing a culture worth maintaining and developing. And Thien Thai Communal House is such a destination. Let's find out this unique destination in Vung Tau through the article below!

Category Hide
1 Origin and history of Thien Thai Patriarchate
2 Location of Thien Thai's ancestral home
3 Discover Thien Thai family when traveling to Vung Tau
3.1 Architectural design of the project
4 The campus and the scene at the family area

In 1929, Thien Thai pagoda was completed, Venerable Hue Dang restored Long Hoa pagoda and rebuilt Thap To. In 1933, on the occasion of the death anniversary at Thien Thai pagoda, the deceased asked to build the tower first, at first the monk did not agree, but because the disciples begged, the monk agreed. In 1935, in response to the Buddhist revival movement in Vietnam, Venerable Hue Dang established "Thien Thai Zen Buddhism Tong Lien Huu Hoi", abbreviated as "Thien Thai Thien Giao Tong" located at the pagoda. Thien Thai.

During the anti-French period, Thien Thai pagoda was destroyed. After 1954, the pagoda was restored by Most Venerables Minh Tam and Minh Nguyet and disciples in Tongmen, and completed the restoration in 1959. At this time, the great ordination hall was also opened here.

When the resistance war against the US spread, in 1965, facing the dangers of war, only the Buddha statue could be moved while Thien Buu pagoda and tower were destroyed by bombs.

Architectural design of the project

Thien Thai communal house owns an area of ​​​​nearly 6 hectares, with 4 areas that are Thien Thai, Thien Khanh, Thach Dong, and Thien Buu Thap main halls. In front of Thach Dong's door, there are two parallel sentences in Chinese: "Ta Thach Vi Tuong Thuong Lao Tuong and the Emperor, Vi's style of war is Dai Chi Dai Dao Lac No Border". Thien Thai Pagoda was built with its back against Dinh Co mountain, the temple yard is about 5 meters higher than the ground level, the pagoda architecture is unique and different than other ancient pagodas in the South.

The main hall is a square building with a side length of 51 meters. The main hall has two roofs, built with green stone taken from the mountain, carved very neatly. In the middle of the main hall, there is an altar with a square stone pillar in the middle, surrounded by four different stone pillars forming the shape of the word "Five" to form the shrine.

Four altars are made of green stone radiating in four directions: In front is to worship Buddha Shakyamuni, in the back is to worship Patriarch Bodhidharma, the two sides worship Mother Buddha Chuan De and Bodhisattva Quan Am. Behind the main hall is a row of guest houses, the groom's house, the preacher's house, and the monks' quarters.

The campus and the scene at the family area

Around Thien Thai communal house is a system of green trees that shade for visitors to walk around and breathe in the air. The green space and fresh atmosphere here will help visitors have moments of relaxation, peace, harmony with nature, temporarily away from the noise and fatigue of life, regaining energy for those who are tired. Next Day.

When visiting, tourists should dress politely, do not bring food to eat at the temple, bring incense to facilitate burning incense, praying and worshiping.

Visitors turn along the three-level road winding around Dinh mountain, going up to admire the beautiful natural scenery with the rich and fertile Tan Thanh and Long Dat plains. Discovering Dinh Co mountain, visitors will know a unique destination that is the temple on top of Dinh Co. There is a shrine to a sage, coming here visitors will hear stories about a gentle and courageous woman. The shrine is visited by many people, burning incense and praying because they believe that going to the temple to pray will bring them satisfaction.

In short, Thien Thai communal house is a destination of great historical and cultural value, spiritual value not only of Vung Tau but of the whole nation of Vietnam. If you have the opportunity to travel to Ba Ria - Vung Tau, do not miss this destination! 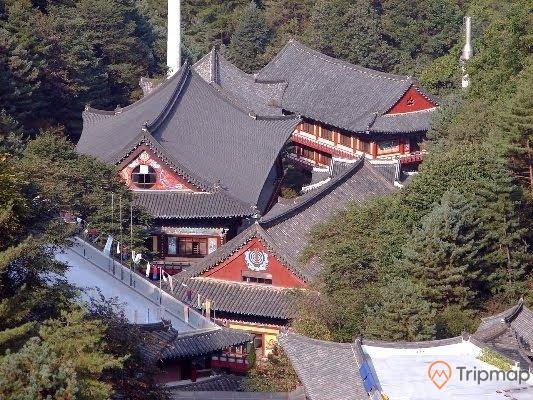 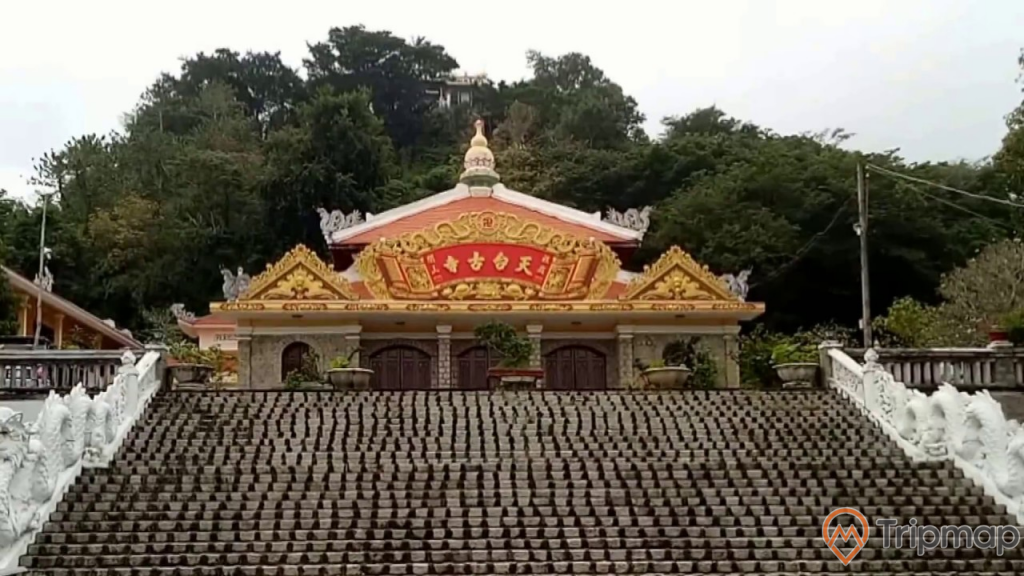 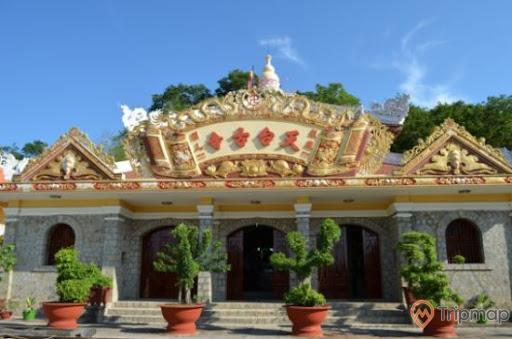 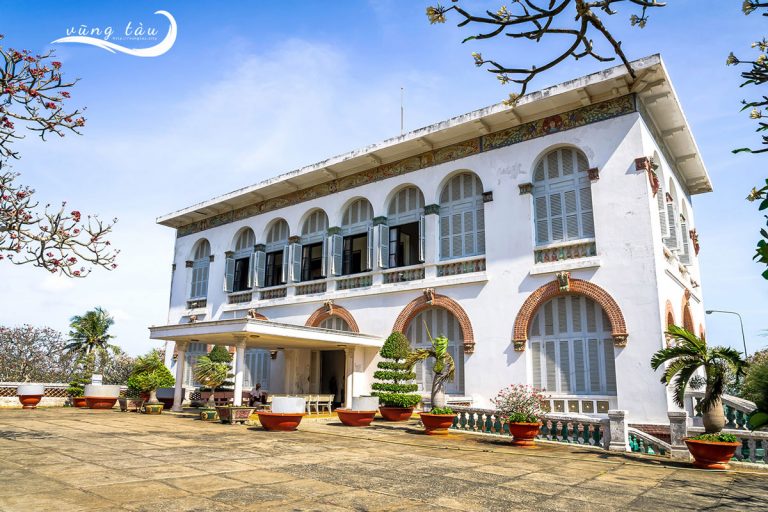 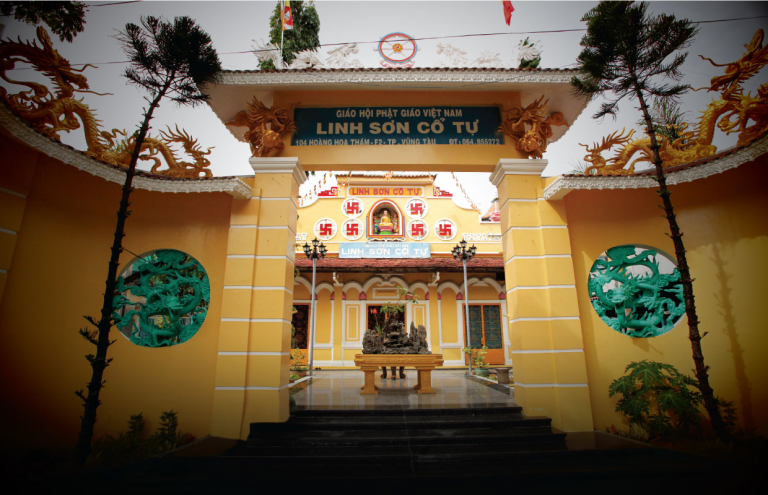 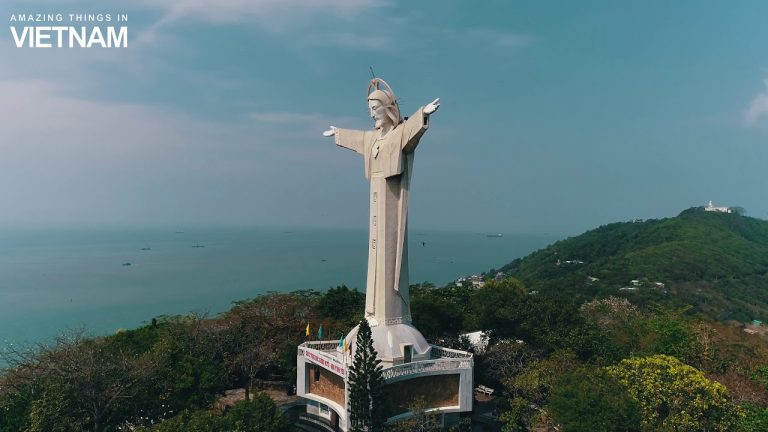 Statue of Christ the King 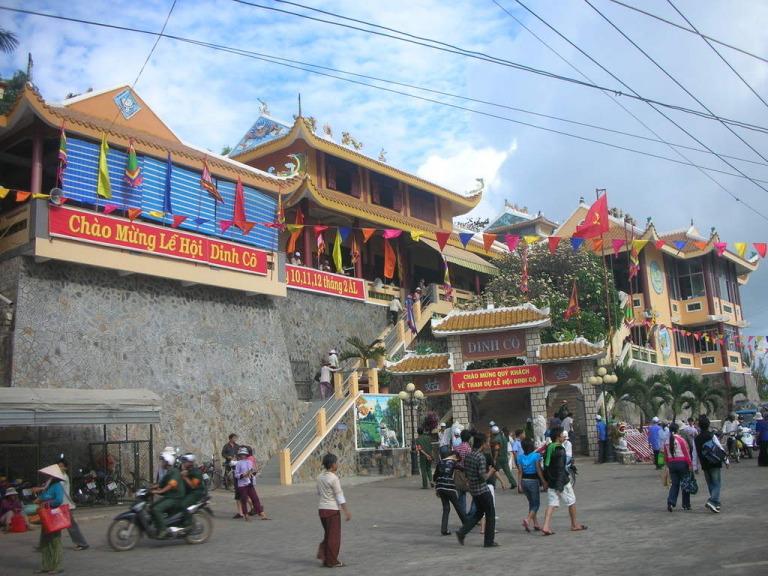