Quan Lan, Van Don is one of the famous places, preserving many historical relics, many heroic cultural vestiges as well as religious traditions and beliefs of the nation. The temple dedicated to Tran Khanh Du is one of the national monuments and is the pride and gratitude of the people here for the talented general of the Tran dynasty who recorded many resounding feats in preserving peace for the land. water.

Tran Khanh Du - the hero of the nation

As a talented general of the Tran Dynasty, a national hero, he was ordained as Nhan Hue Vuong by King Tran at a very young age. He was famous as a patriotic deity, a talented general, a tactician, a scholar of martial arts, and a sharp military theorist who made many glorious victories for the dynasty.

According to history books, he was from Chi Linh, Hai Duong, his father was Senior Lieutenant General Nhan Hue serving Tran Pho Duyet, his mother was Tran Thai Anh. From his youth he proved to be very intelligent, alert, and very brave.

Growing up, he was highly respected by King Tran and adopted as a son and given the title Nhan Hue Vuong, holding many key positions in the court. And especially assigned the key town of Van Don.

Therefore, nearly half of his life he was associated with this glorious land, with the army and people and was born to fight the Nguyen - Mong invaders to maintain the sea and islands, develop the economy, and establish diplomatic relations with foreign countries. through the port system.

A talented general, a strategist, a hero of the nation

Tran Khanh Du was a general who played a great role in the resistance war against the Nguyen - Mong invaders three times. On the Van Don line, he and his generals destroyed 100 war ships and over 70 stone luong and weapons of the 3rd Yuan court (in 1288).

This battle smashed the will to invade Dai Viet of the Nguyen Dynasty, the country was clean of enemies, focused on economic development and built the most prosperous dynasty in history. Not only that, he also had merit in quelling the rebellion in the South, Binh Man, and unifying the South and the North in one house.

In particular, he defended the important trading port of Van Don for many long years, prevented many malicious foreign conspiracies through merchant ships entering our country, kept the country's borders, and promoted cultural and economic exchanges. .

After his death, to commemorate his great gratitude to the country, the local people focused on building shrines (museums, temples) to worship at Quan Lan, Van Don. Over time, the temple was also damaged a lot, the government has restored, embellished and built many new places many times. Up to now, this is an ancient architectural work that is both ancient and modern, and is the pride of the residents here.

In the past, people built temples quite spacious, according to the architectural style of the word "Ding". The wooden material is all precious Lim wood, so it is extremely durable and solid. The temple is arranged with five large compartments with a harem protruding behind, four curved corners, and on the roof is embossed with the image of "Two dragons adoring the moon". The middle space worships Saint Tran, the left and right houses "left and right" are arranged on both sides.

The interior of the temple, especially the trusses, beams, and columns are carved very delicately and meticulously with the motifs of "dragon, clouds, flowers, dragons, lilies, turtles, phoenixes". In the altar, there is a bronze statue of Tran Khanh Du placed on a high pedestal, under which there are three bowls of incense and a pedestal to place sacrifices.

Look closely on the rafters, vertical beams, crossbars…everything is engraved with words, carved with a dragon's head. On each end of the mane clawed back, the pillars depicting lotus flowers, chrysanthemum flowers, two reliefs in the harem and outside the temple are also engraved with the image of "Two dragons adoring the moon" meaning hidden flowers and clouds. around like on the roof of a temple.

Experiencing many historical events, this ancient structure was damaged. In 1961, the village elders held a procession of tablets and statues to reside in the communal house. By 2011, the Party and the government and the people here contributed funds to rebuild the entire "temple" back to its original location.

In 1961, the village elders carried the tablet, ordination and statue of Saint Tran Khanh Du back to the temple at the communal house. In 2011, the Party, State and local people contributed to rebuilding the entire "temple" on the old location.

Today, the temple is widely built in a cool, airy space, the courtyard is paved with many large old trees radiating luxuriant shade. In particular, there is a semicircular lake with transparent water. At the main gate, there are two more columns, on top of which are embossed cranes, the sides of the columns are engraved with couplets.

Visitors to the Temple of Tran Khanh Du not only admire the extremely delicate architecture and are moved by the quiet and sacred beauty, but also have the opportunity to experience the procession of the Holy Spirit. Quan Lan Communal House, the procession of Saint Tran from Nghe An to Dinh in the historic Van Don Traditional Festival. 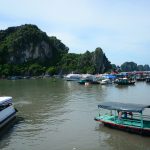 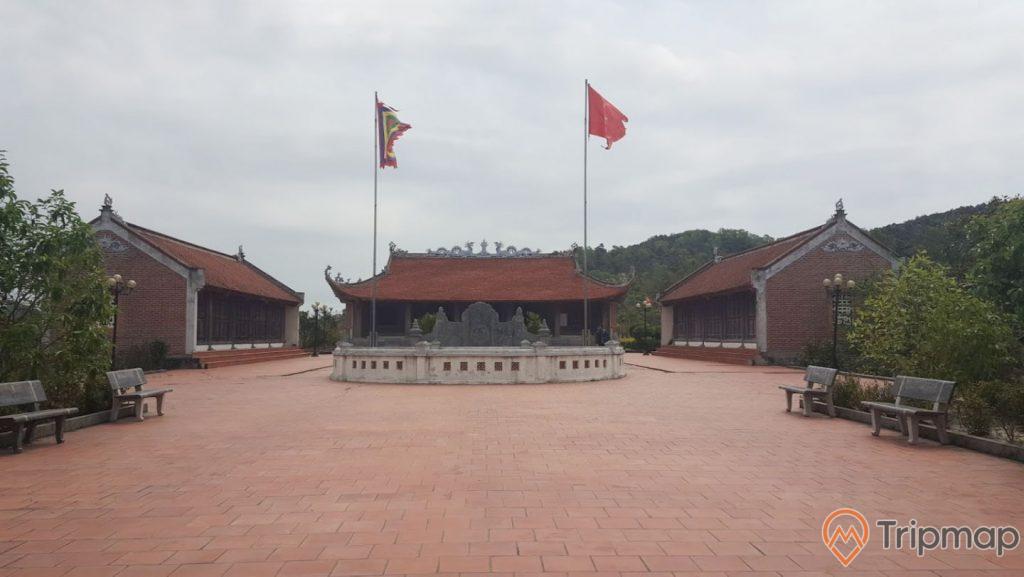 Front view of the shrine 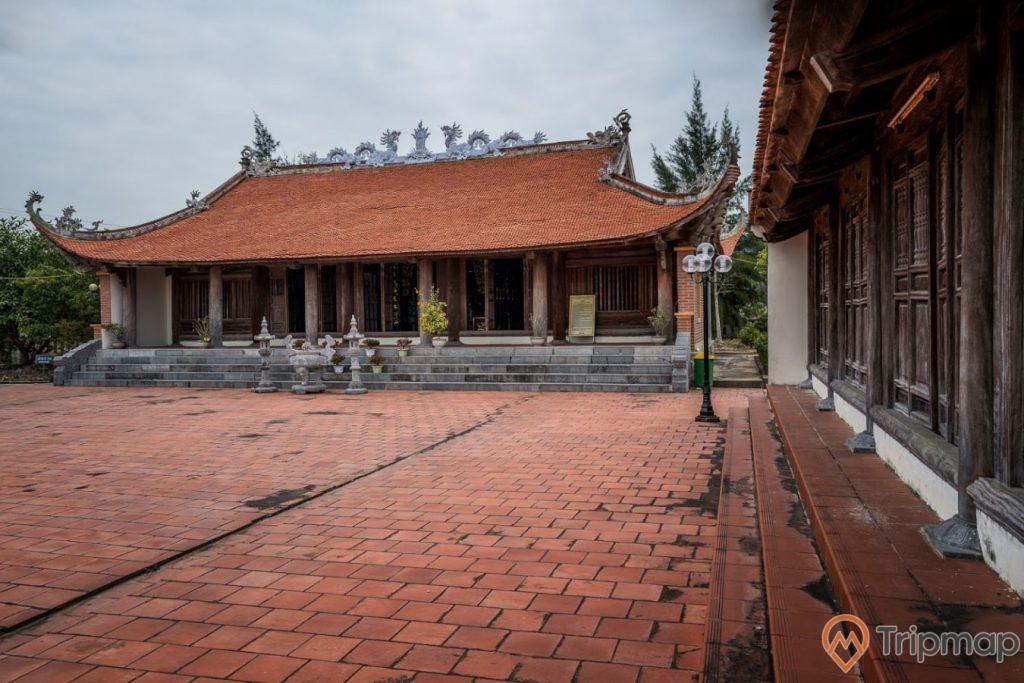 Architecture of the shrine 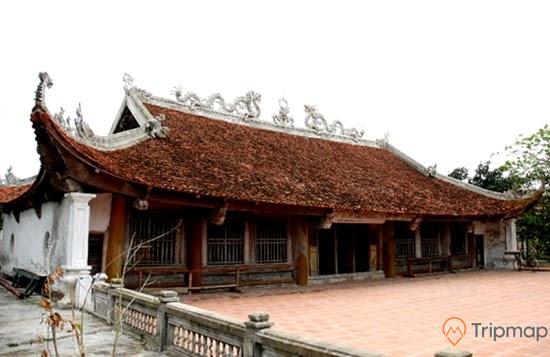 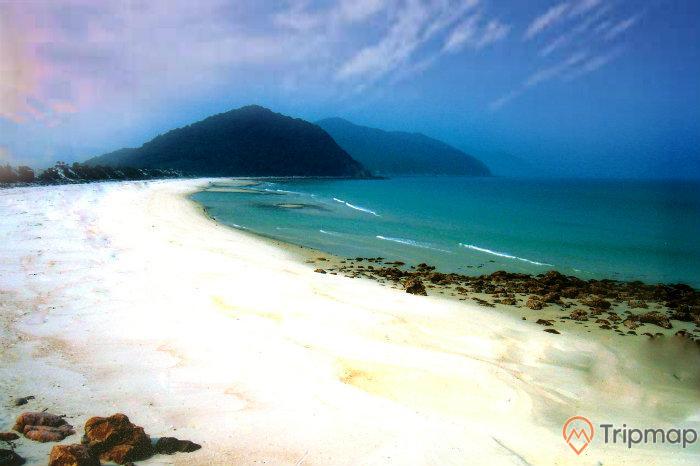 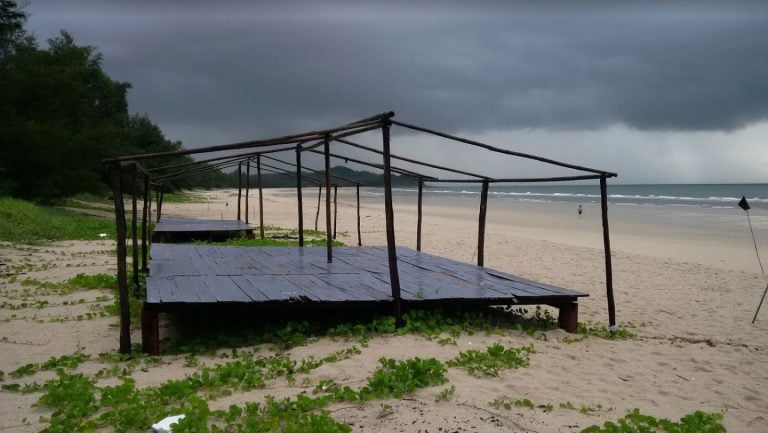 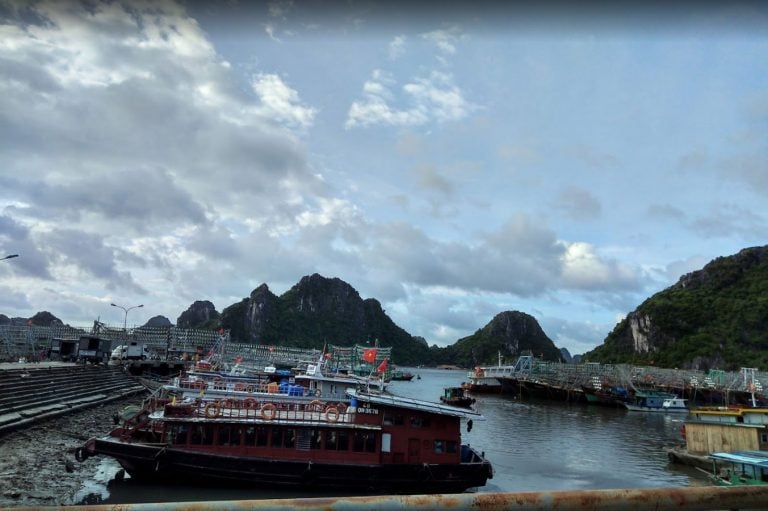 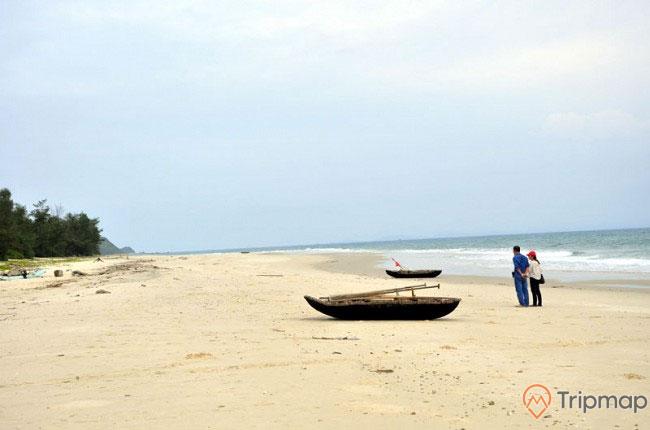 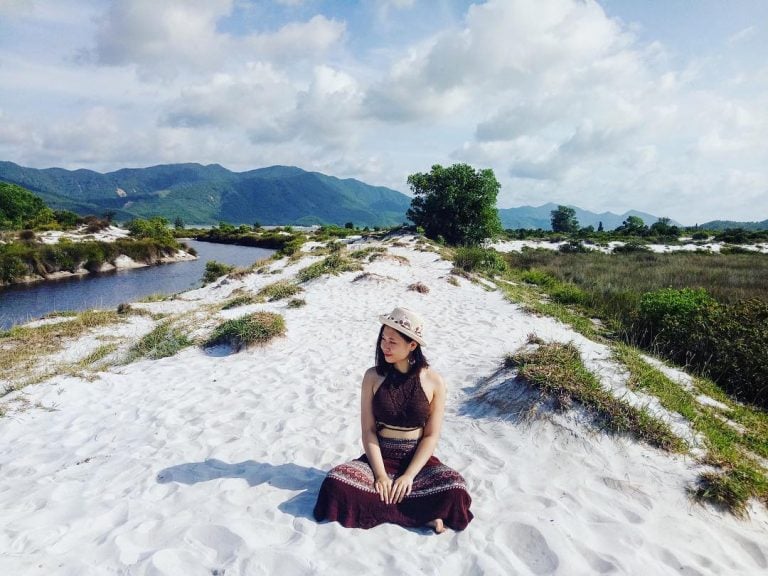 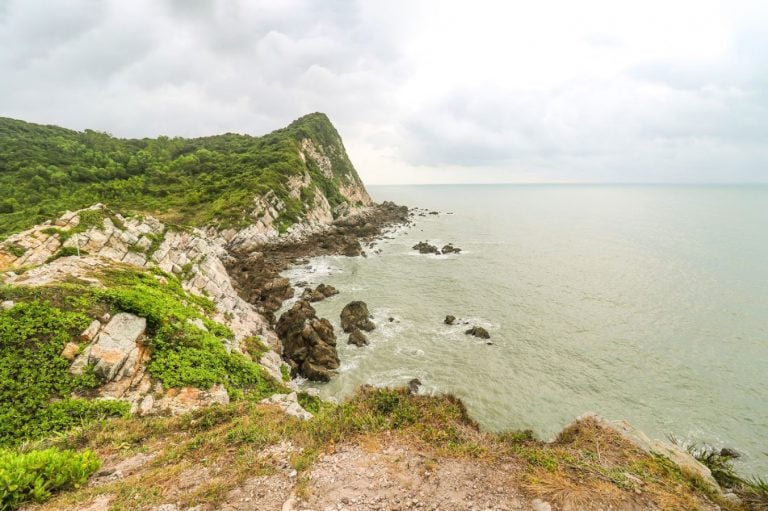 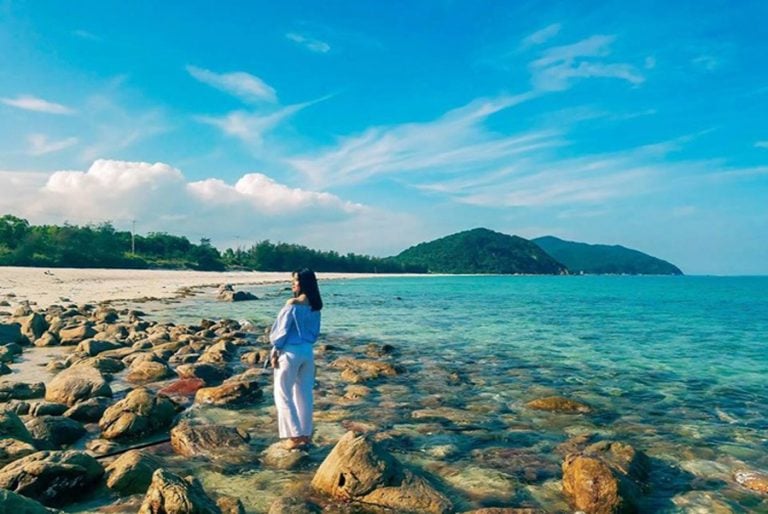 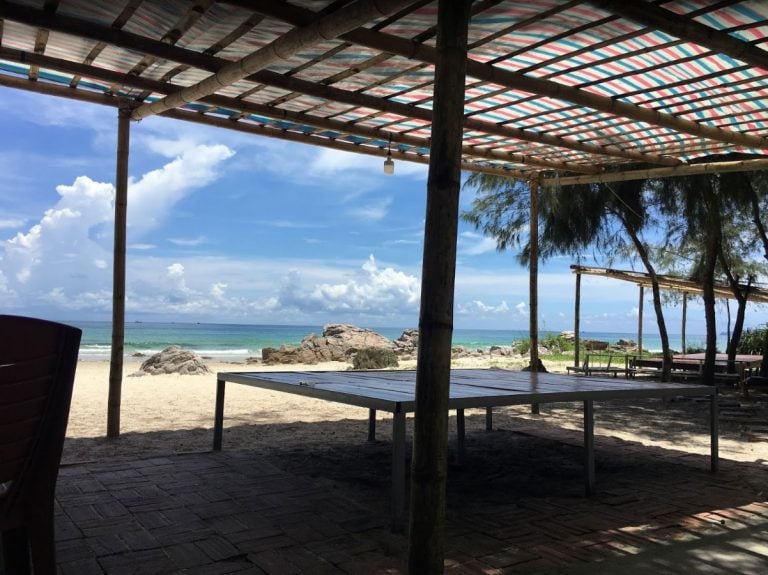 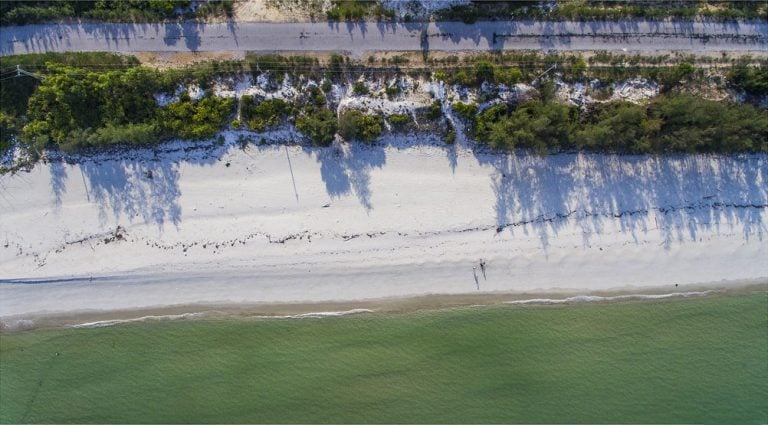 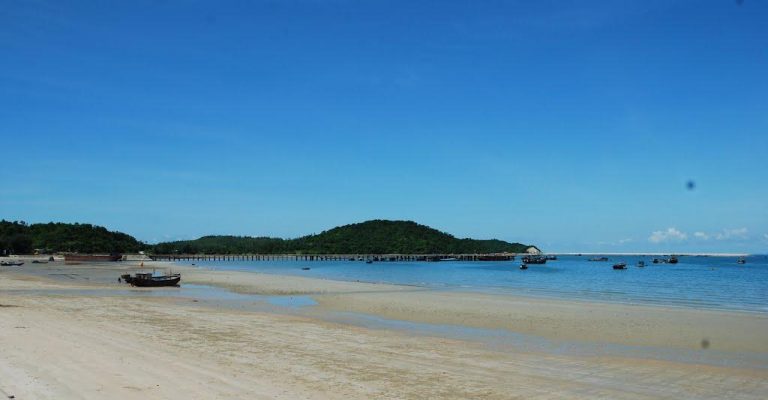 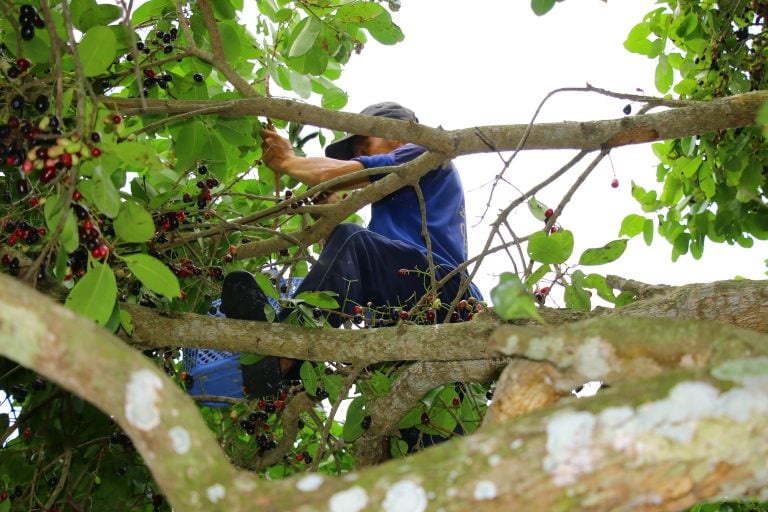