Owning a beautiful location, is the gateway to the world's natural wonders Ha Long Bay, Tuan Chau Island become a shining gem on the shore of the bay. Today, this pearl island is increasingly becoming the most popular tourist destination with many large and modern man-made construction systems such as Tuan Chau port - the largest international passenger port in Southeast Asia, Tuan Chau amusement park and not to mention King Kong park. Coming here, visitors seem to be entering a world of Hollywood's magical studios combined with a particularly impressive natural landscape that is no different from a miniature painting of water under many styles, giving visitors many different attractions. emotional level, rich experiences.

Some discoveries about King Kong Park

Located right in the center of Tuan Chau island, built on an area of ​​thousands of square meters, about to be put into operation, King Kong park system promises to bring visitors many impressive experiences like never before. , opening a colorful world, becoming a unique entertainment and virtual living spot, attracting millions of domestic and foreign tourists to visit. With four main themes:

This can be said to be the largest and first sculpture park in our country with countless giant stone statues depicting animals from prehistoric times to historical figures. in the legends and fairy tales of our country.

When coming here, visitors will admire hundreds of giant stone statues sculpted in all positions, shapes, and movements, just like a miniature animal world in horror movies of Vietnam. Hollywood. Featured are prehistoric dinosaur statues, god skeletons, giant statues and many rare ancient animals that you have never seen in real life. All will make you think of a famous movie "Jurassic Park".

The world of legends and fairy tales

Next to the prehistoric animal images is a system of stone statues simulating historical characters such as Lac Long Quan, Au Co and hundreds of children, the statue of Cuoi banyan tree, Ms. Hang... All reconstructed. Very real and lively. Visitors feel like they are lost in the world of fairy tales.

This is a system of images simulating the legend of the mother dragon and the baby dragon associated with the story of the divine dragon walking on Ha Long Bay. When coming here, visitors will be completely conquered by the unique, ingenious and flexible design and layout. On the side of a large river, each species of dragon, large and small, appears with all postures and states such as playing, sleeping, flying, running, jumping, etc. and it is estimated that up to 18 types of mythical Dragons are sculpted here.

Especially impressed with the giant dragon statues spraying fire, spraying water, spraying smoke and mist which is extremely fanciful. At the same time, it emits interesting sounds, creating strong emotions for visitors when approaching. These images are thought to only be seen in movies, but they are real on the shores of the heritage.

Not only being adventurous in the legendary world, but coming here, visitors are also immersed in the romantic and poetic space of beautiful nature. Those are the winding mountain roads, winding hidden, appearing in the green pine hills with lush green grass like a miniature Da Lat. This is an ideal place for dates, weekend picnics with family, lovers and friends.

Based on the natural water flowing down from the top of the mountain, the investor designed the flow to pass the stone waterfall to form a clear waterfall flowing down the lake bed and then following the winding stream around the park. At the same time, harmoniously combined with charming natural scenery such as rocky mountains, green forests, stone bridges, trees, flowers, animals, etc., mixed with the murmuring sound of water, creating a fanciful and fanciful space. as beautiful as a fairyland.

What do visitors to King Kong Park experience?

Coming to King Kong Park - Tuan Chau, visitors not only enjoy discovering and experiencing new virtual life, but also immerse themselves in the vast natural space, the destiny of mountains, rivers and natural landscapes. love. You can be walking around a country from the highlands to the plains, the sea and experiencing all the milestones of the history of time from prehistoric times to modern times. It can be said that this is a diverse, rich and very unique tourist destination that promises to bring visitors many emotions and amazing discoveries.

Not only that, from here visitors can easily combine Cat Ba tourism, go to Co To, go Halong cruise – Lan Ha, visit famous ship ports across the continent and enjoy many attractive sea specialties with unique culinary style and many top-class, luxurious and modern services. 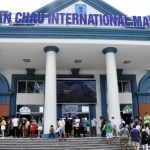 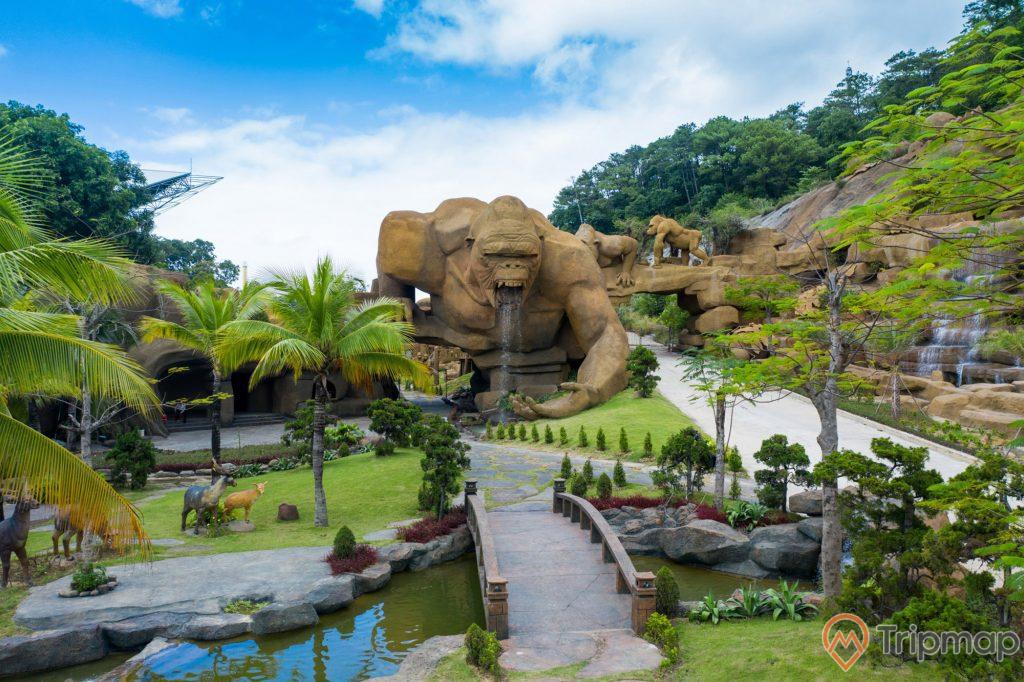 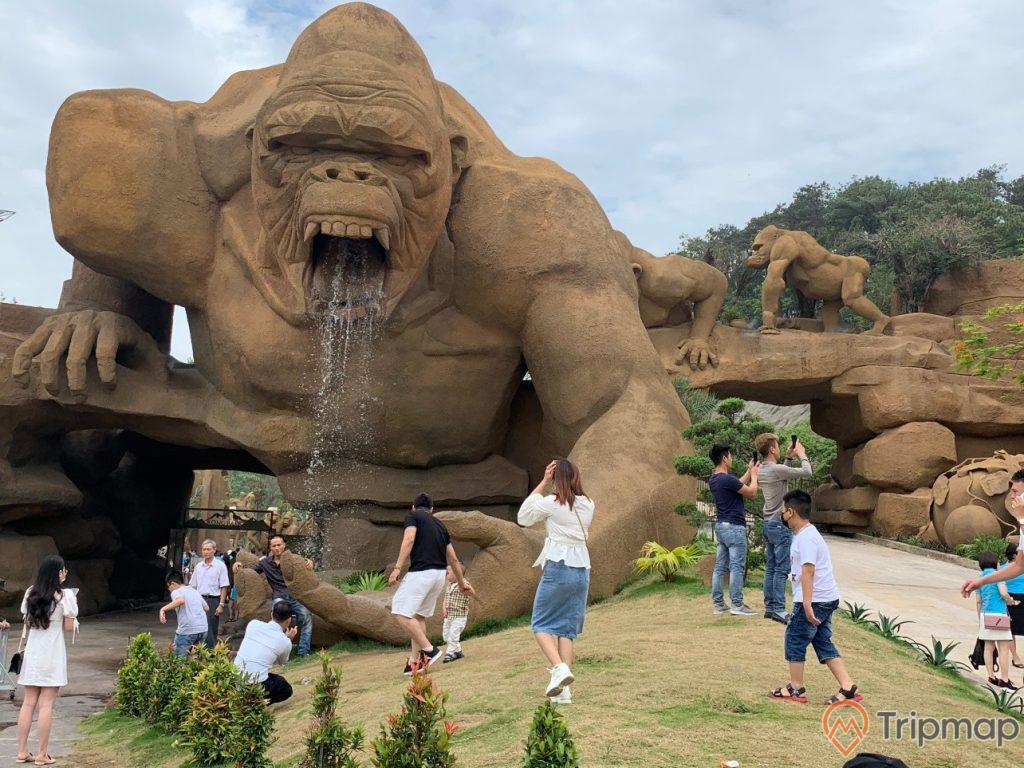 People standing and posing for photos in the park 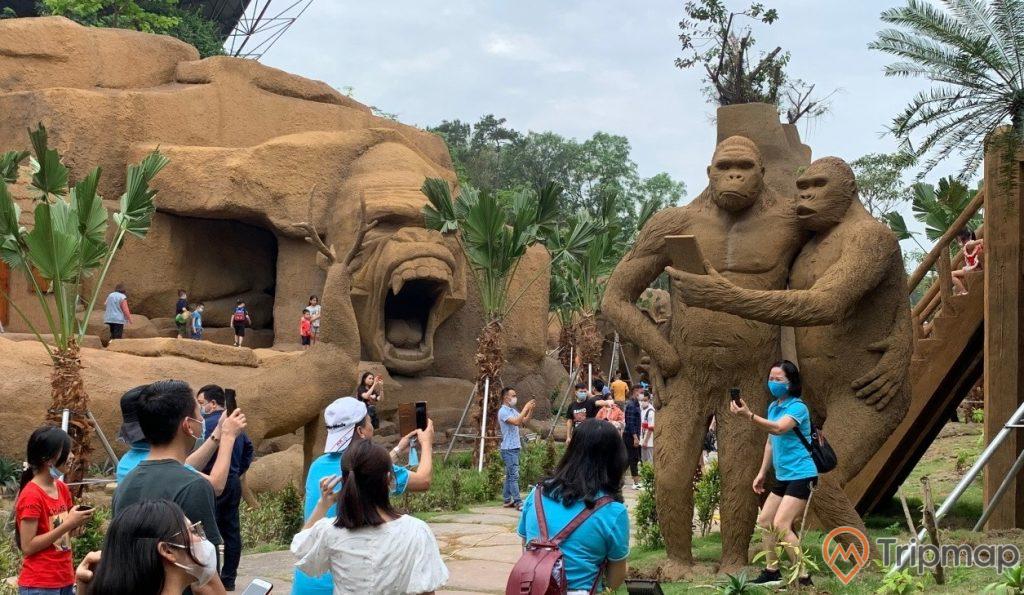 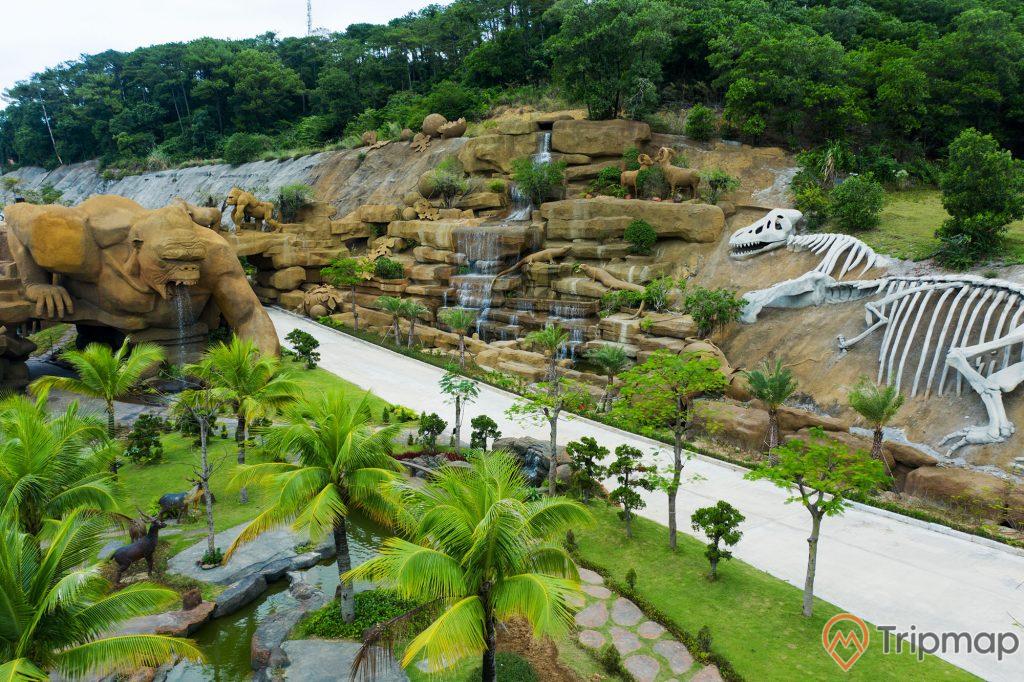 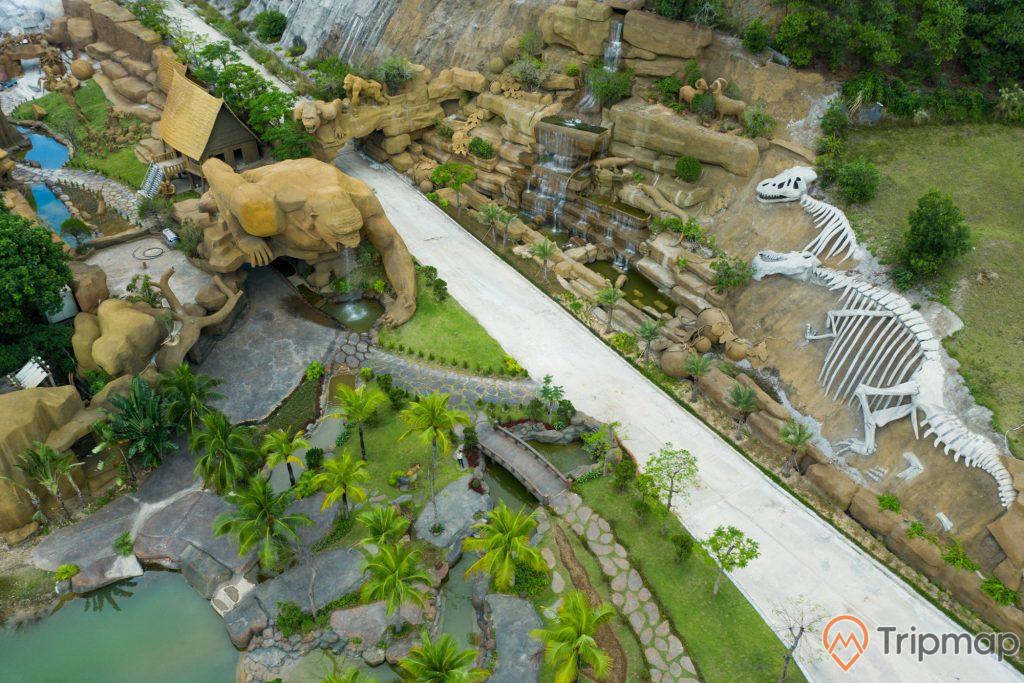 Panoramic view of King Kong Park from above

A photo of King Kong Park from above 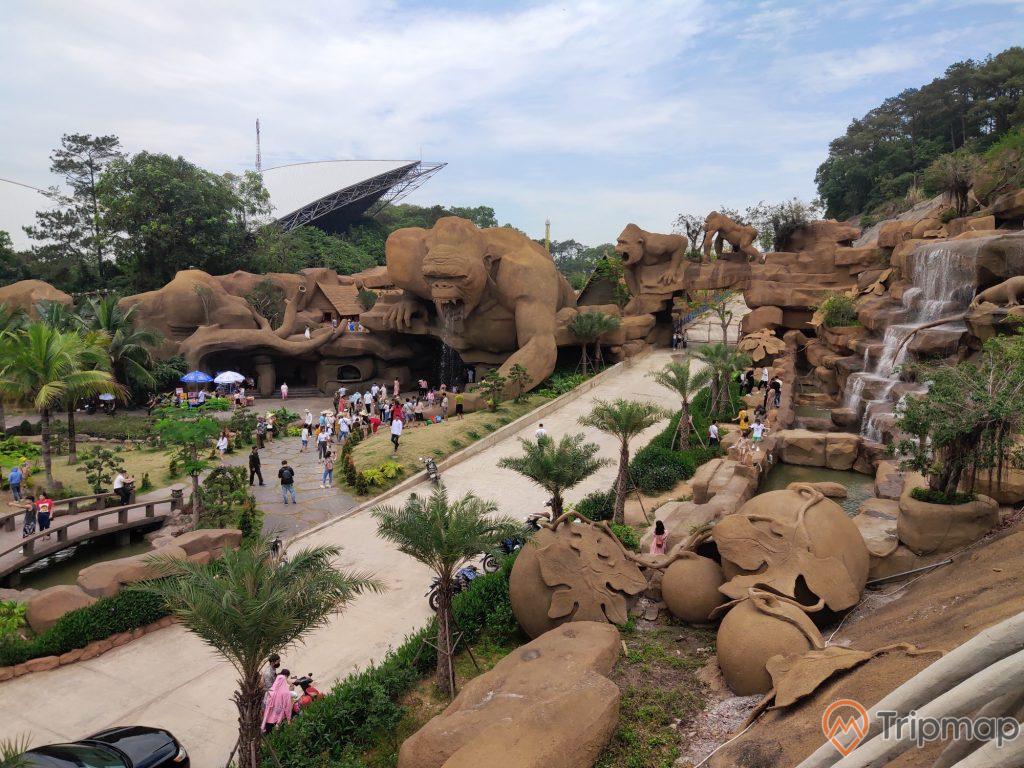 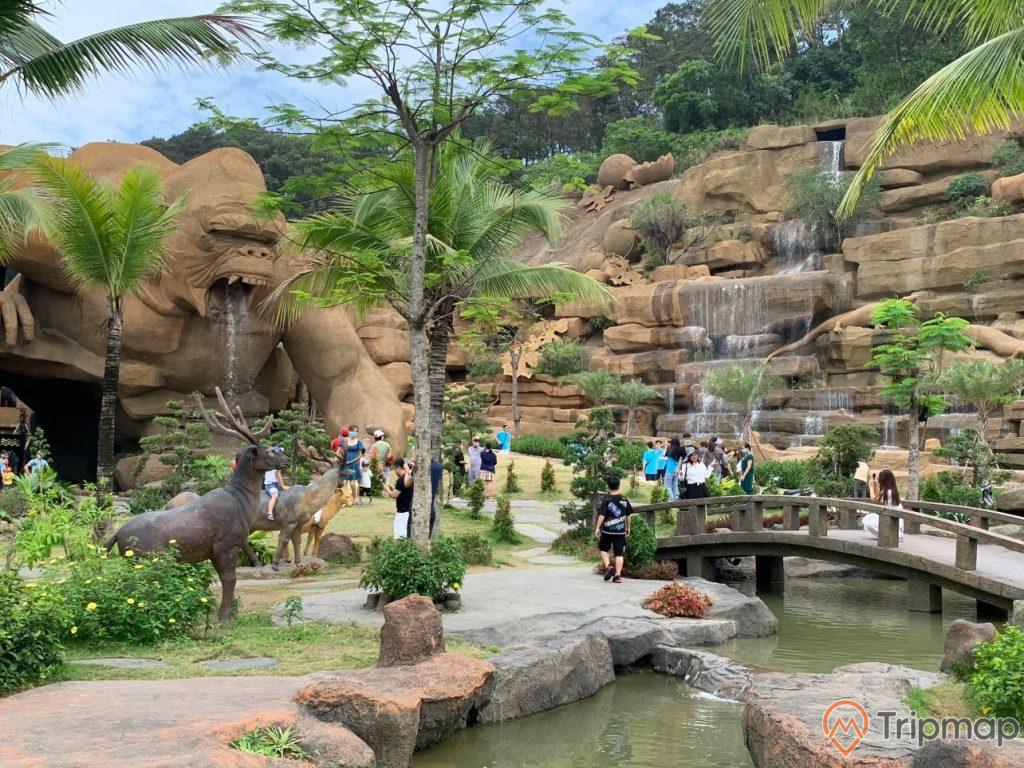 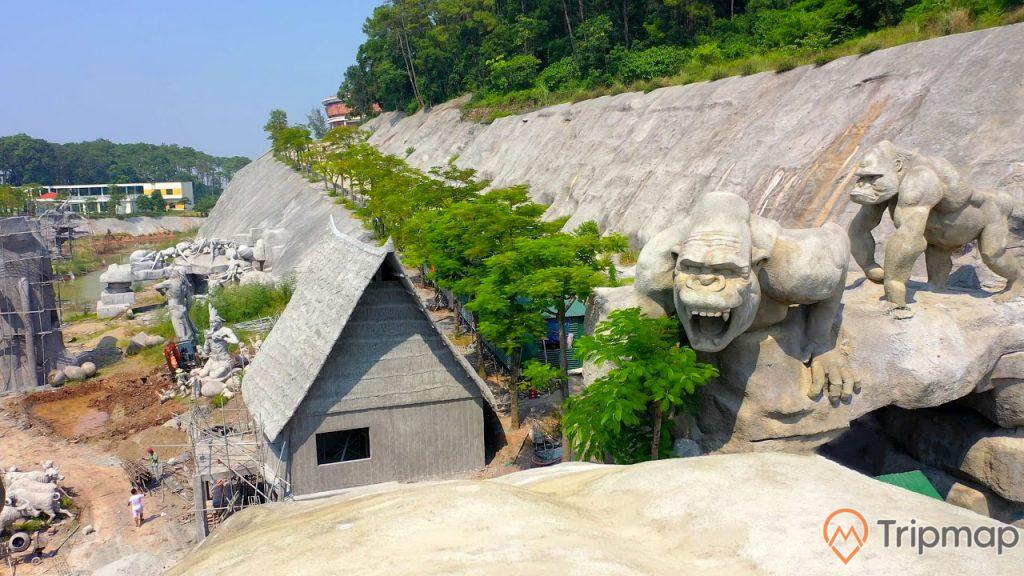 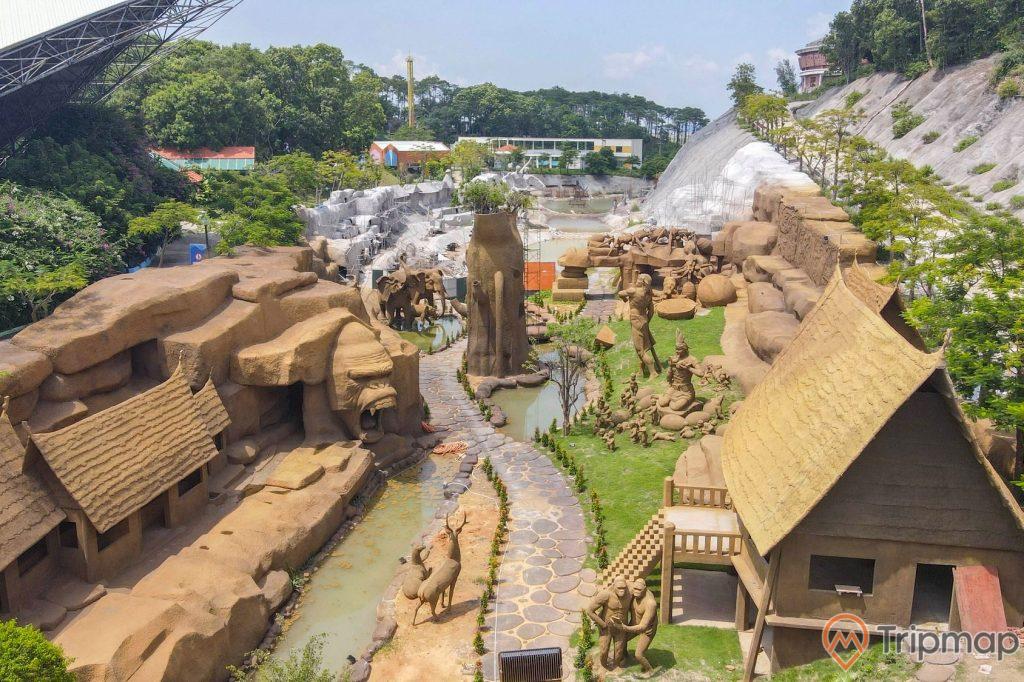 A shot in the King Kong Park campus

Pictures of attractions in the park 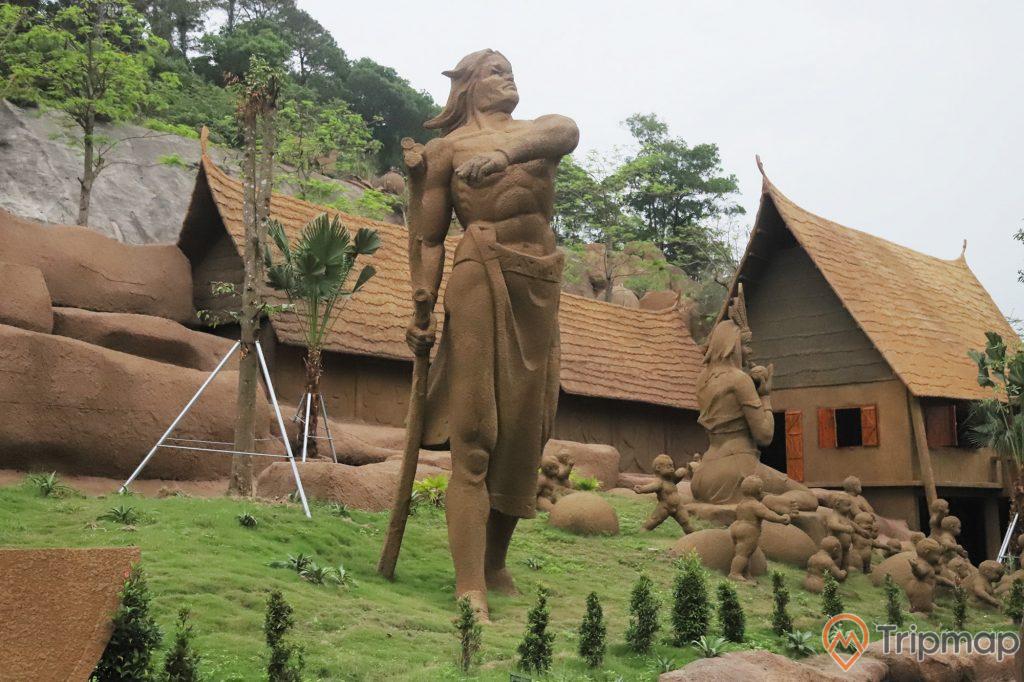 Elephant statue made of concrete 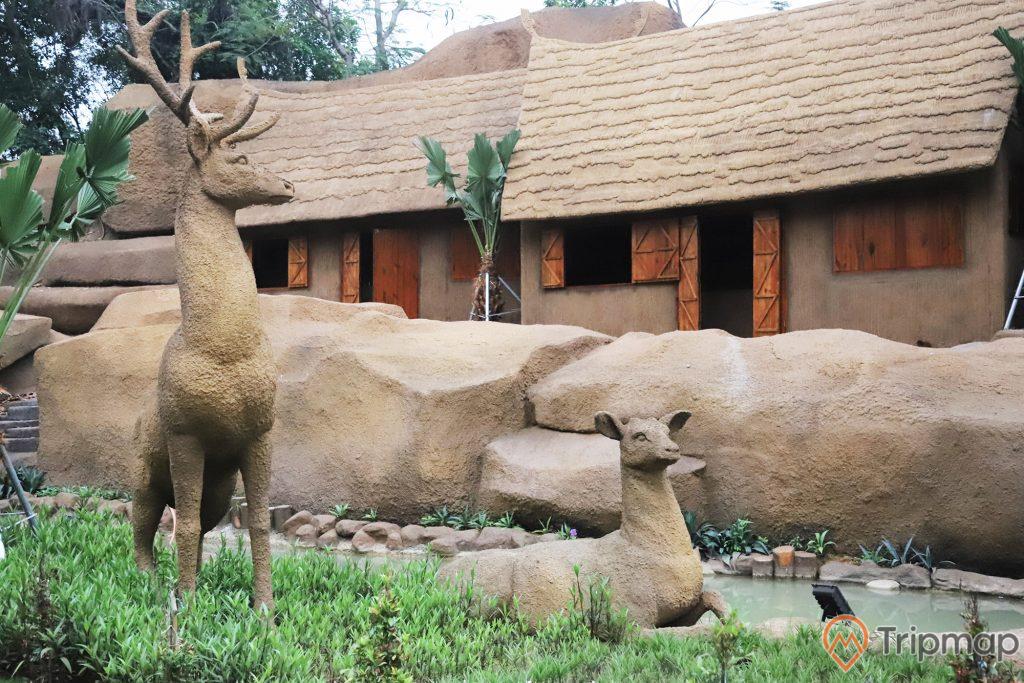 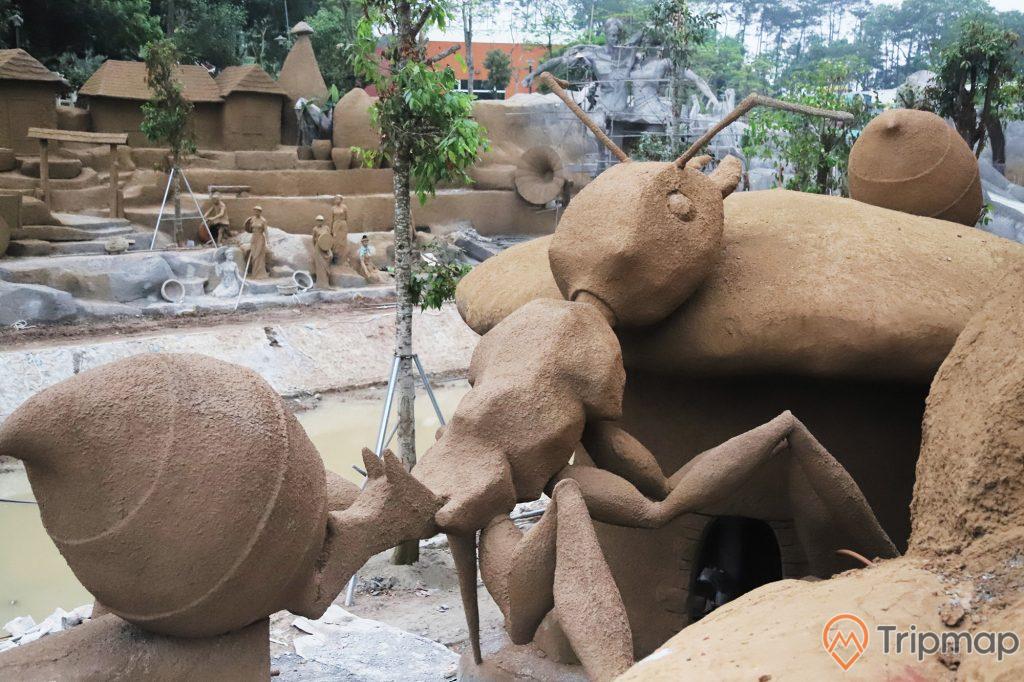 The image of a giant ant crawling 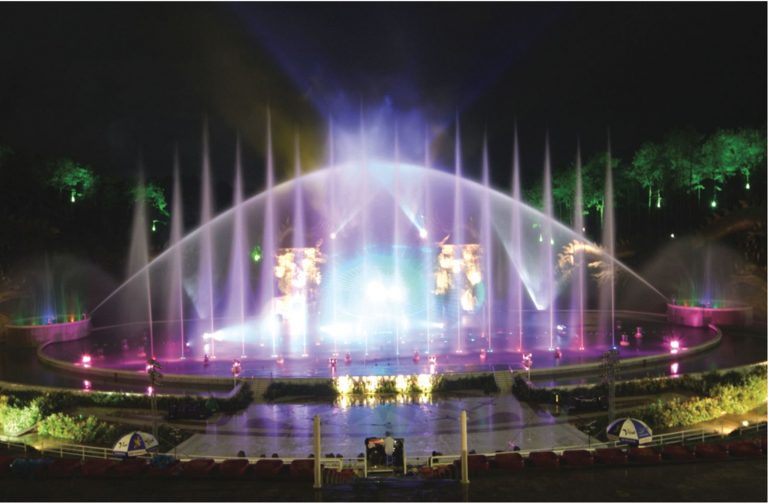 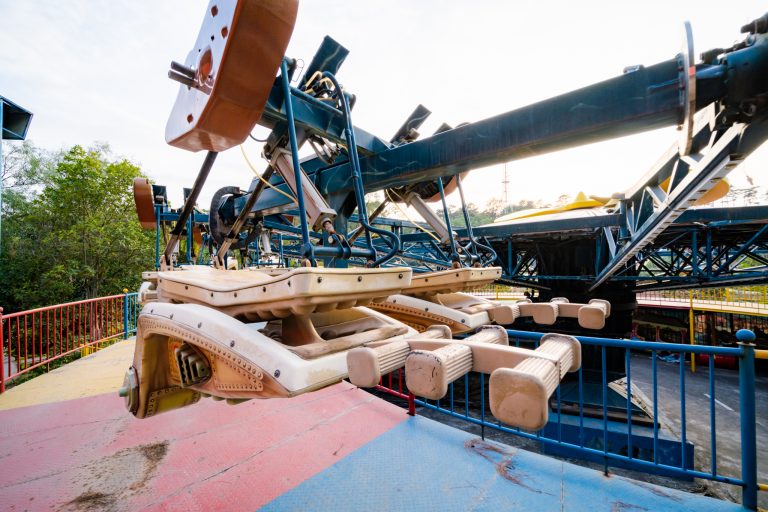 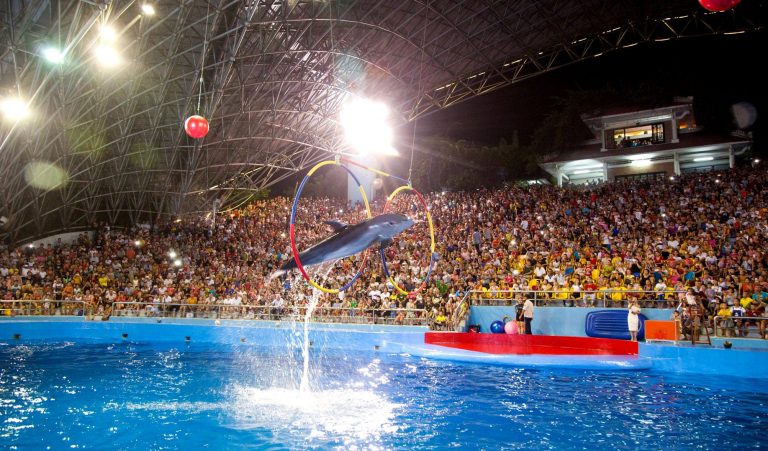 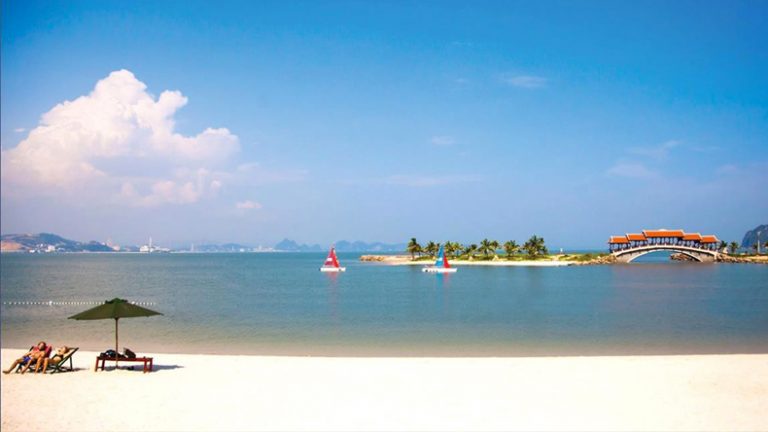 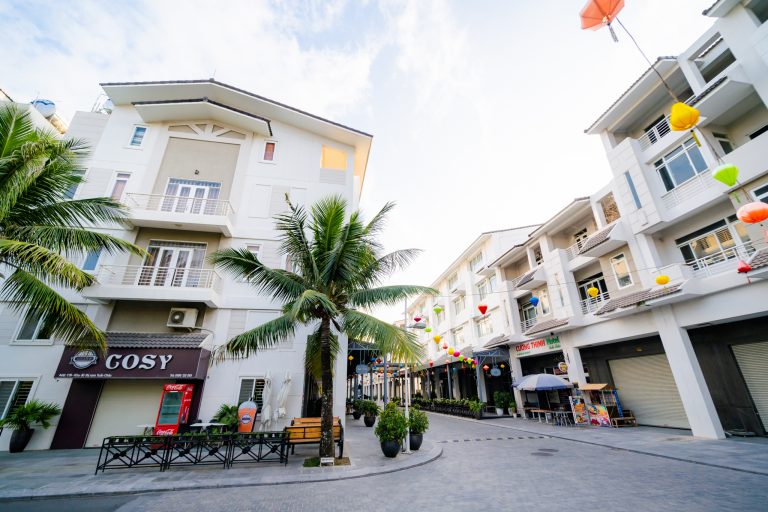 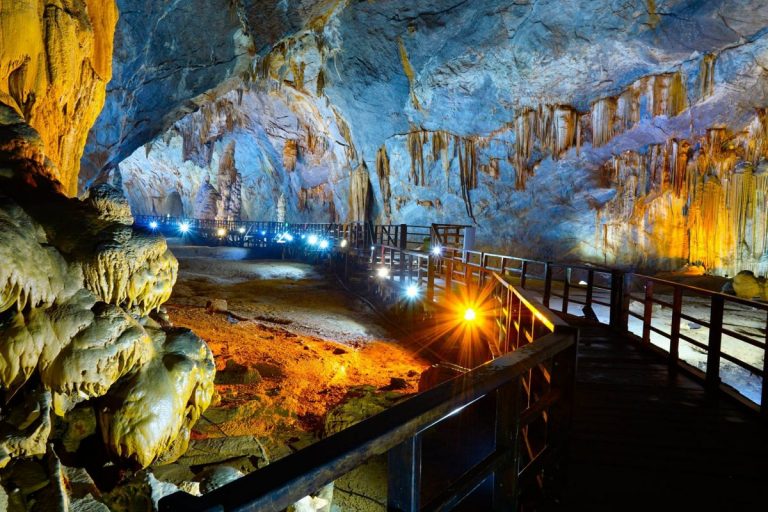 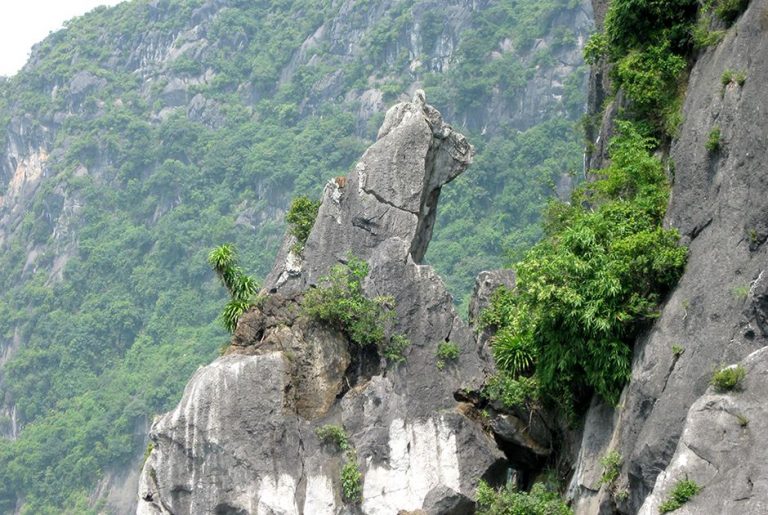 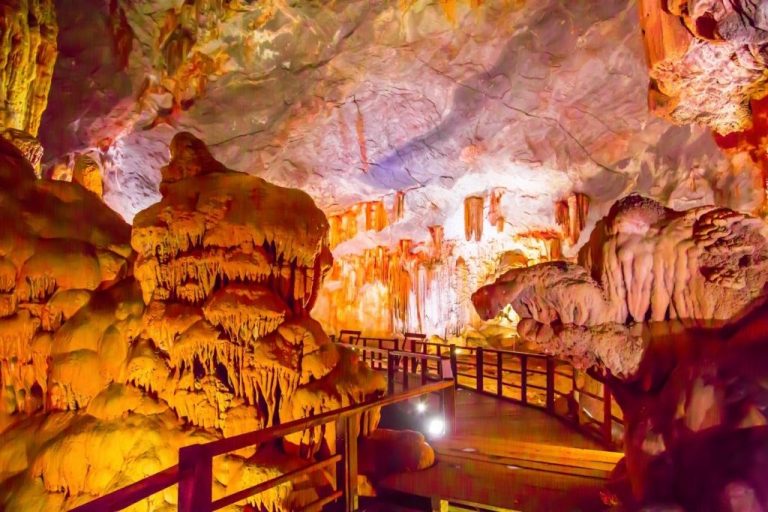 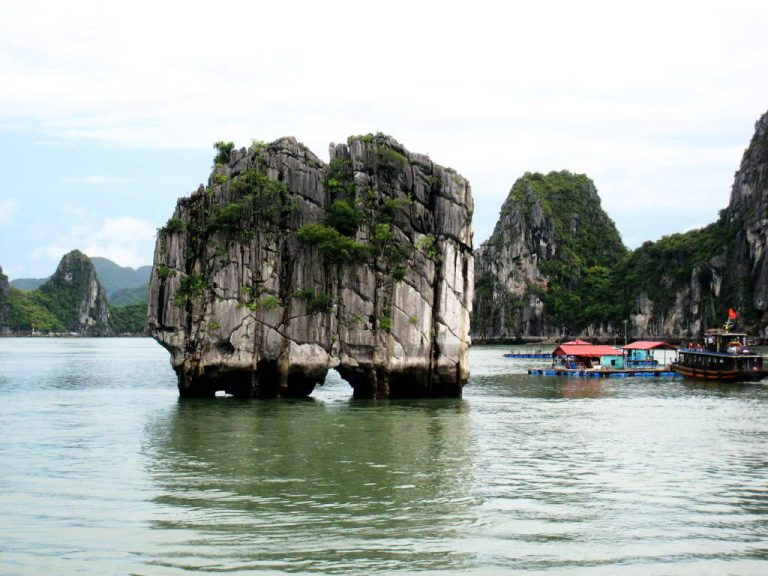 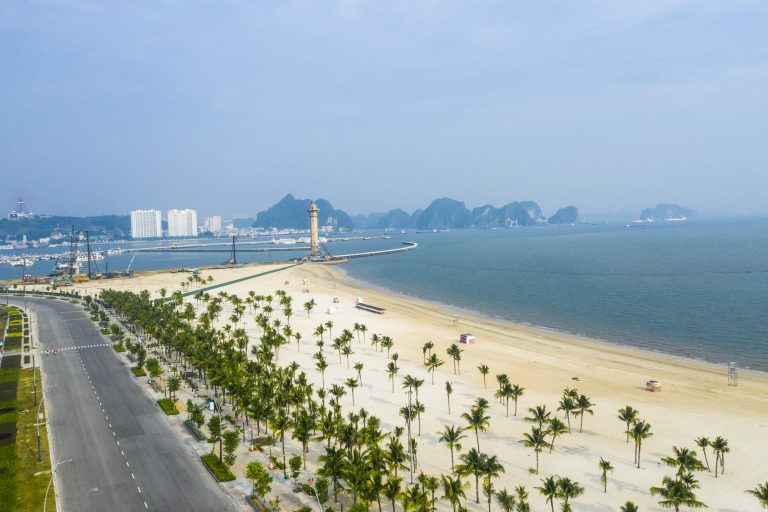