Ha Long Bay is a famous destination with beautiful scenery with thousands of islands and caves. One of them is Bo Nau Cave (Pelican Cave) located in the southwest of Ha Long Bay. This place can make your sightseeing journey an unforgettable experience in Ha Long.

Category Hide
1 Legend of the name
2 Bo Nau cave tour experience
3 How to get to Bo Nau cave?

Legend of the name

The story goes that, in the past, that cave was once inhabited by a flock of pelicans. The pelicans were so numerous that they filled the cave. Therefore, the cave was named after the pelican, Bo Nau Cave.

The mouth of Bo Nau cave is quite wide with a size of 5-7 meters. The cave is dome-shaped and has many stalactites falling from the ceiling of the cave. Right above the entrance are three stone blocks. They look like a sculpture of three fairies playing chess. The space inside has an area of ​​200 square meters. The floor of Bo Nau cave is flat with many different stalagmites growing in different sizes and shapes.

From the cave, tourists will get a unique view of Ha Long Bay, which looks like standing in the mouth of a monster with sharp teeth and seeing the beautiful scenery outside.

Bo Nau Cave (Pelican Cave) is located in the southwest of Ha Long Bay. It is about 13 km from Bai Chay tourist station and 2-3 km to the southeast of Trong Mai island.

The name Bo Nau or Pelican is associated with the fact that pelicans often reside here. If Dau Go cave completely inside the island, Bo Nau opens its mouth on the other side of the island. In particular, stalactites fall from the roof of the cave in different groups. Meanwhile, the stalactites have developed in different shapes and layers. Each stalactite is a work of "nature's art".

Going deep into Bo Nau cave, visitors will feel like they are lost in a big stage of nature, the ceiling of Bo Nau cave is nine strips of soft stone curtains interwoven with silk. The two sides of the cave wall are like props with musicians and dancers. From compartment to compartment, the structure of the second compartment was like a narrow starry sky, in the middle of the cave was a large mold directly above the three fairies. Looking at the right wall of the cave, under the light of the door as much as a falling waterfall, we will feel like we are in the middle of blurred arcs.

The left side of the cave is made up of natural stones stacked on top of each other through the fine mist and the sacred sound of water drops, we can see as if every step of the fairy walks on the clouds above. sky. Bo Nau is known by nature lovers through famous photos of the cave, in front are released stalactites, in the distance are green waving mountains, containing mysteries published in many books and magazines. solstice.

Going south, Bo Nau cave enjoys the nature from the sea with fresh breezes every day. Outside, visitors can hear the murmur of the sea all year round. All of these make the place one of the most interesting caves in Ha Long Bay.

How to get to Bo Nau cave?

Bo Nau Cave is an extremely impressive land for both domestic and international tourists. And like other caves on Ha Long Bay, visitors have to choose for themselves 1 Ha Long Bay sightseeing route that route has a schedule to visit Bo Nau cave. Currently, route 02 – full name is: Route 02: Ship Port Cave Park Conservation Center Area This is the route that tourists can visit Ha Long Bay and the destination is Bo Nau cave.

Not only Bo Nau cave, Ha Long Bay also has many interesting tourist attractions that are loved by many domestic and foreign tourists, beautiful natural caves are being exploited to become an attractive tourist destination. guide: Tien Ong cave, Kim Quy cave, Tam Cung cave;…. and many other unique caves and destinations. 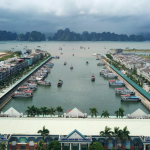 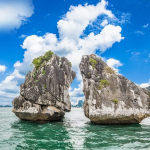 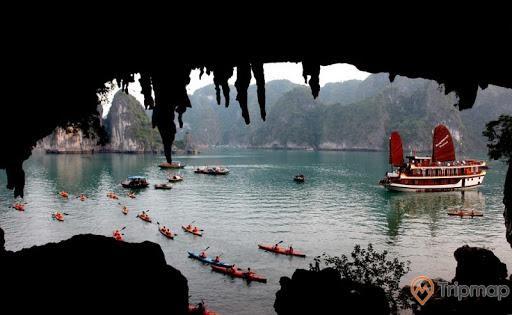 Bo Nau Cave is an extremely impressive land for both domestic and international tourists. 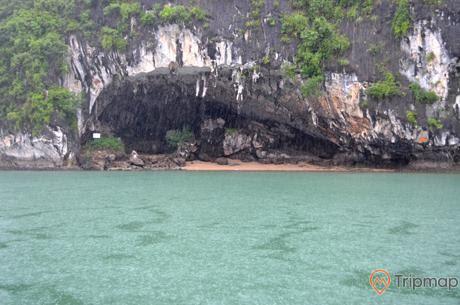 The mouth of Bo Nau cave is quite wide with a size of 5-7 meters. The cave is dome-shaped and has many stalactites falling from the ceiling 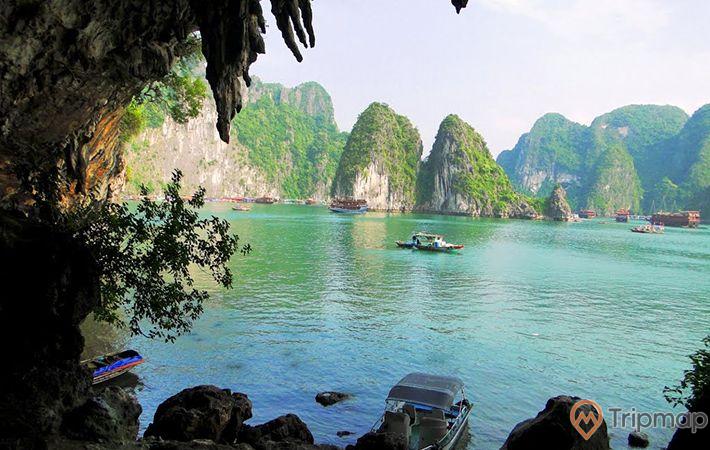 From inside the Bo Nau cave overlooking Ha Long Bay

If Dau Go Cave is completely inside the island, then Bo Nau opens its mouth on the other side of the island 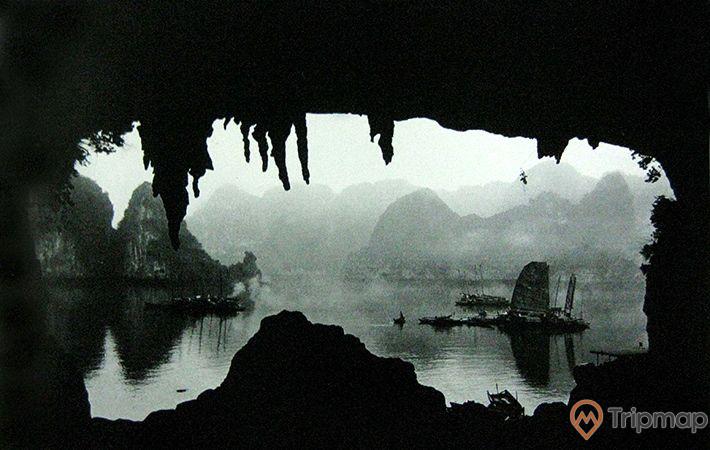 A photo of Bo Nau cave taken from the 19th century

From the cave, tourists will get a unique view of Ha Long Bay, which looks like standing in the mouth of a monster with sharp teeth and seeing the beautiful scenery outside. 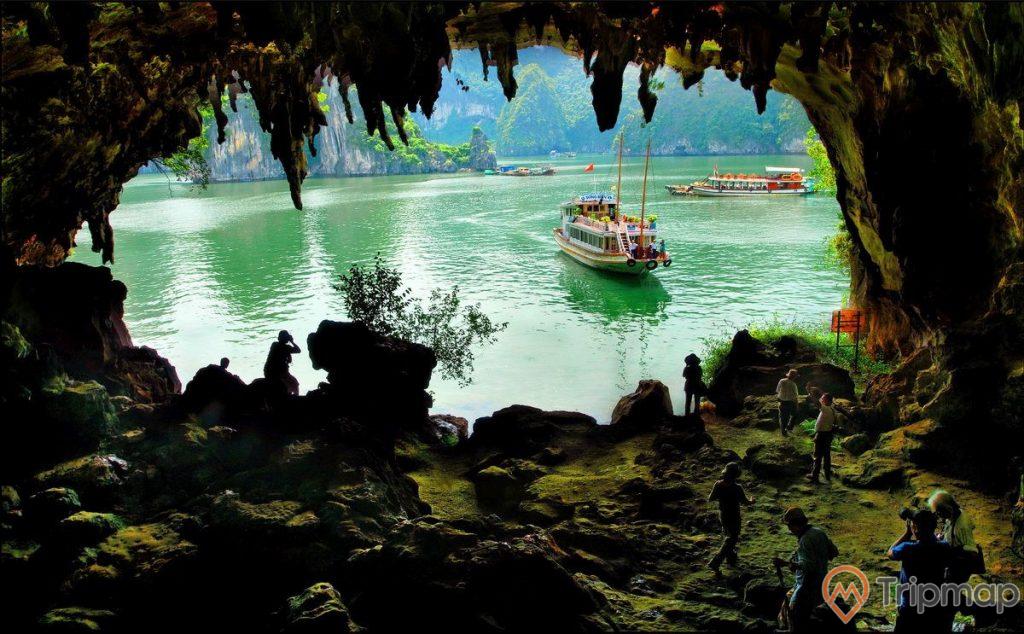 Still the view from the cave to Ha Long Bay 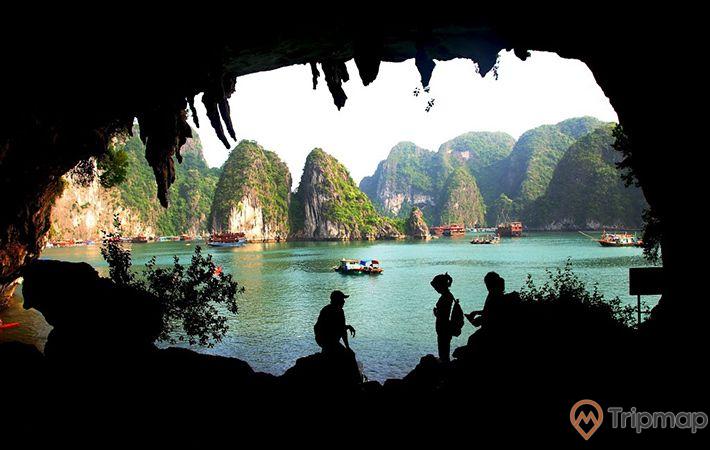 The view from the cave to Ha Long Bay 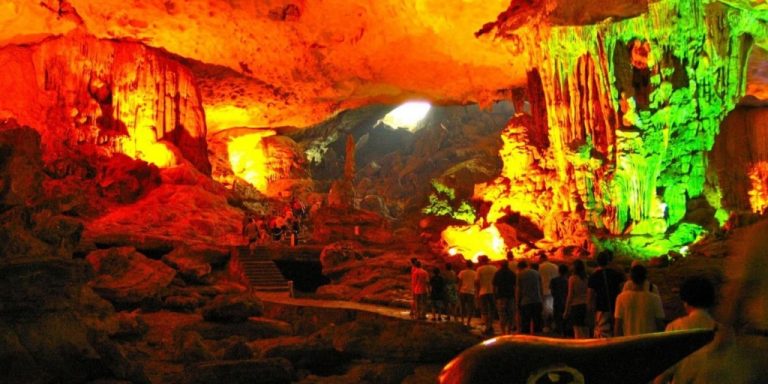 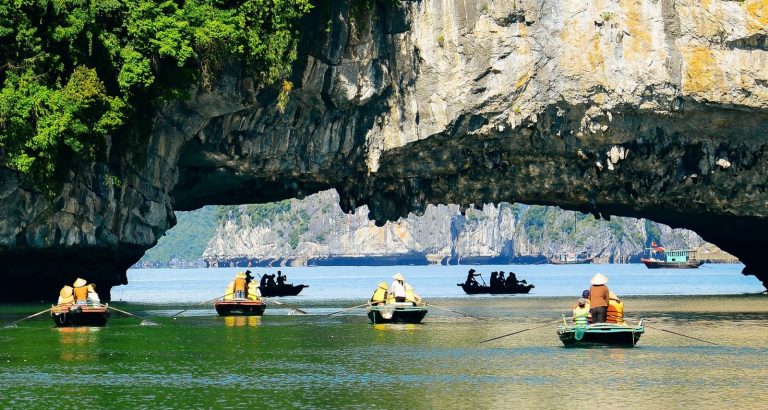 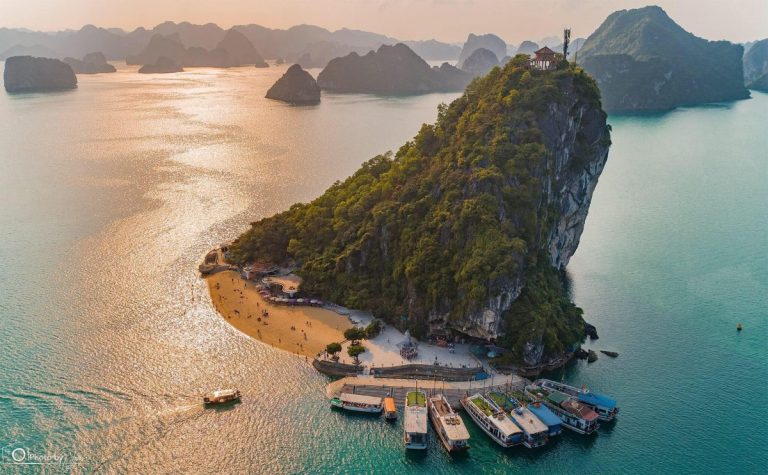 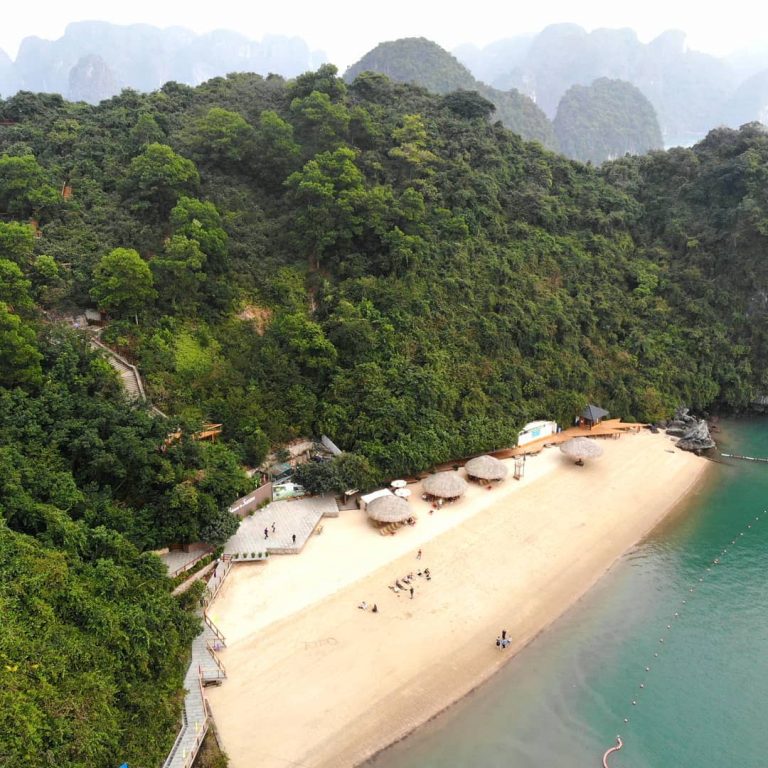 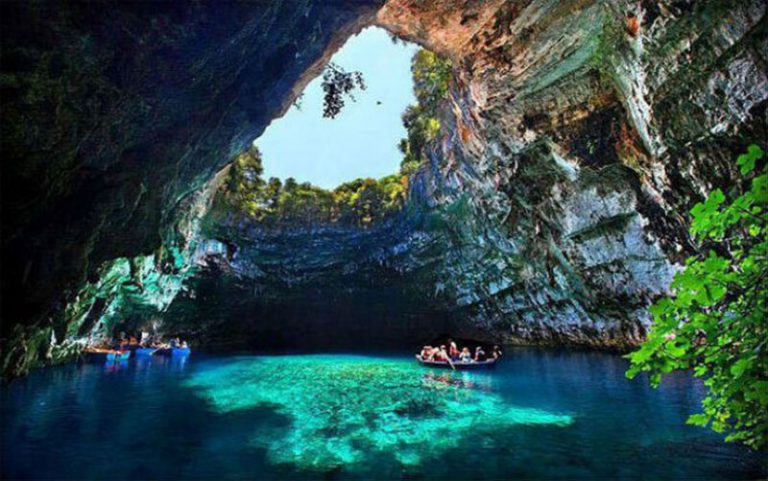 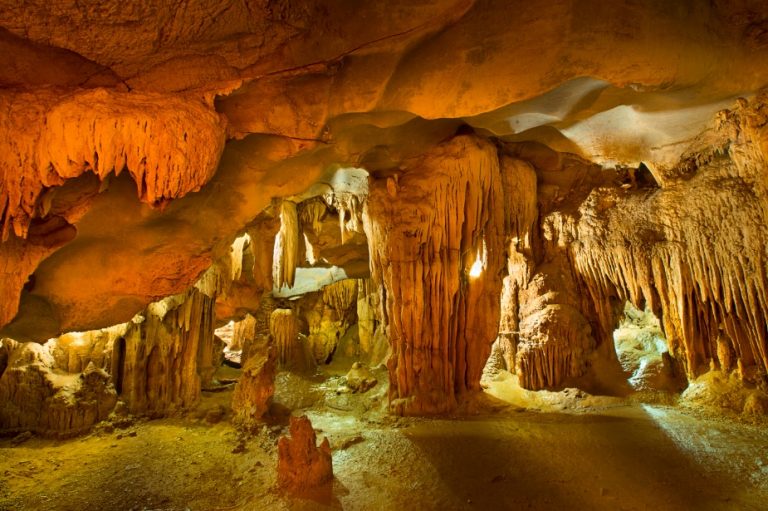 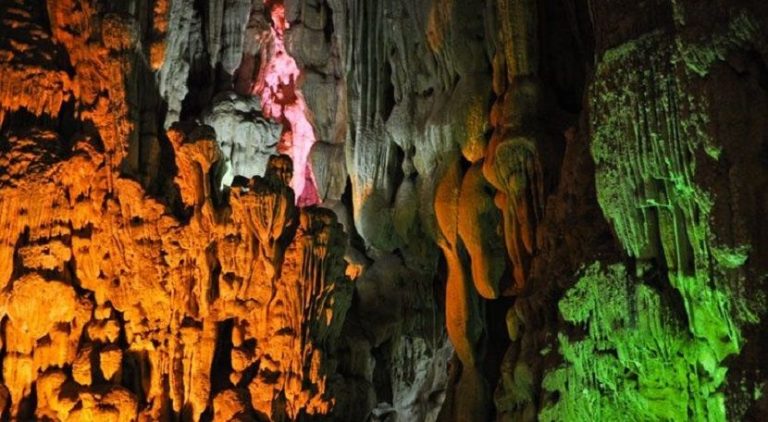 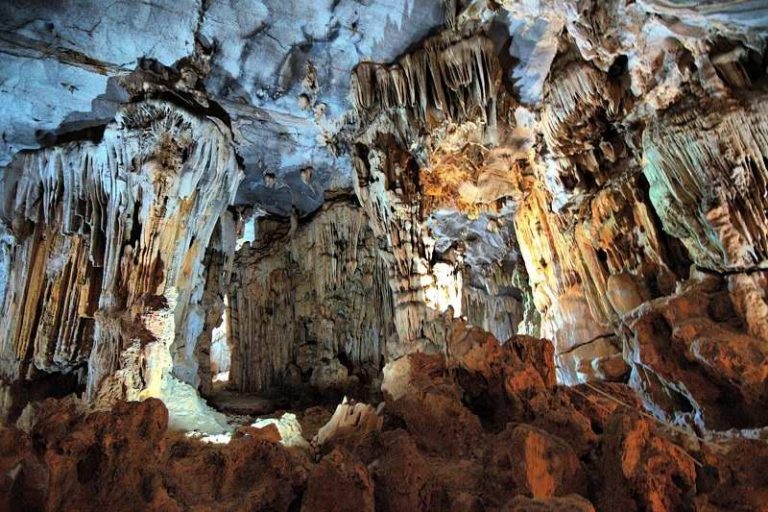 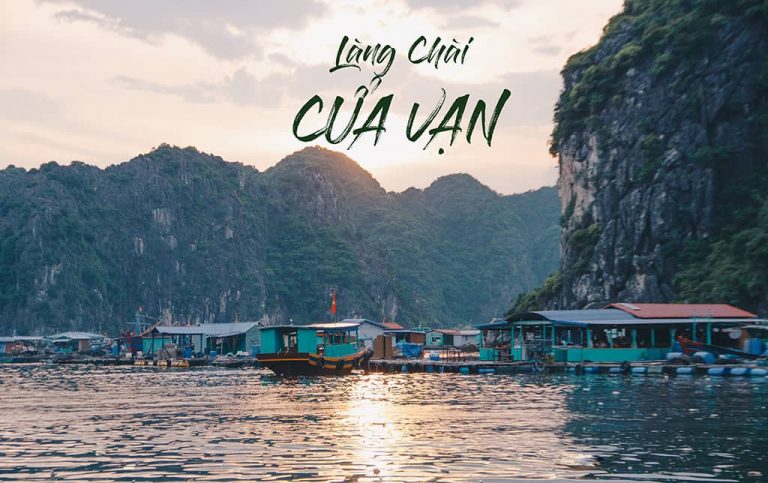 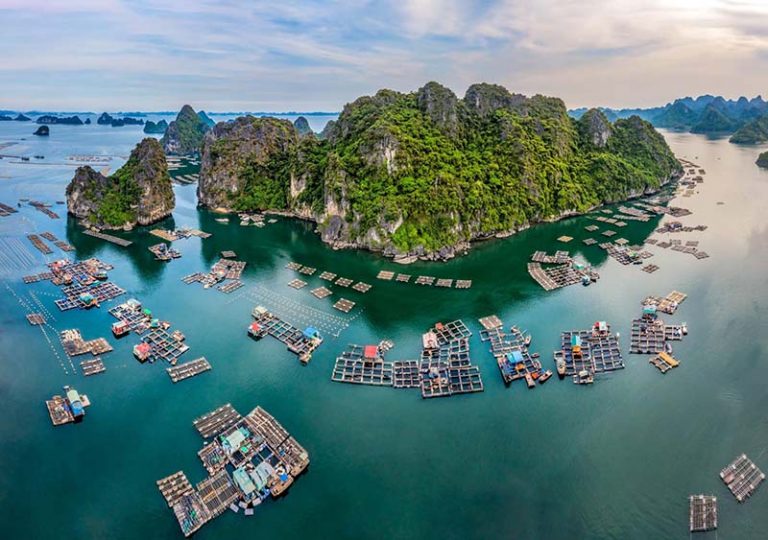