The pagoda is honored to be recognized by the Vietnam Record Book Center as "Asia's largest bronze temple on top of a mountain", a pride of Buddhists in particular and of the Vietnamese people in general.

This is one of the particularly sacred historical sites, converging the thousand-year spirit of Buddhism in the Truc Lam Yen Tu complex. Located right on the highest point of Yen Son peak. This place is considered a land with quite dangerous terrain, quite complicated to travel, surrounded by cliffs up to 200m deep. All year round white clouds, fog covered the way. Seen from above, the temple is dim, virtual, hidden among clouds of smoke and wind.

The name Dong Pagoda has partly said the architecture of this temple. The pagoda was built entirely of bronze and to have this great work it was a process of exhausting, hard-working and enthusiastic research by talented craftsmen in all fields from history, spirituality. , geology to architecture and construction. Not only achieved valuable architectural value but also known as the most sacred temple in the South. Every year, millions of tourists come to offer incense and sightsee.

The first name is Thien Truc Tu, which implies the supreme position on Yen Tu of Buddha Tathagata. According to legend, the ancient pagoda is a spiritual land, converging the sacred flow and the thousand-year spirit of all things. This place is regularly set up a chorus of cheers and dances, praying for favorable weather, peace and prosperity of the emperors. Therefore, Dong Pagoda is considered as a place of return for Buddhists, an unreal Nirvana.

History of construction of Dong pagoda

The pagoda was first erected in the Later Le Dynasty, by a concubine of Lord Trinh standing in charge of construction. At this time, it was just a very small shrine, not enough for one person to pass through. After being ravaged by a storm, it was broken down by thieves to sell copper. Until 1930, because she realized the spiritual value of the temple, Mrs. Bui Thi My from Long Hoa pagoda used copper-concrete to restore it.

But over the years, under the influence of nature and the fierce destruction of the two wars of resistance against the French - American, the pagoda has been destroyed and damaged most of the time. Until 2005, the People's Committee Quang Ninh Province invest in regeneration and rebuild according to the original foundation. After 2 years of construction, until 2007, the new temple was officially inaugurated and received and admired by the whole Asia.

The most unique architecture in Asia's Buddhist land

Dong Yen Tu Pagoda is now built quite solidly, firmly and especially meticulously, with high value, in harmony with the weather and nature. The pagoda architecture is modeled after the Keo pagoda in Thuan Thanh, Bac Ninh. The pagoda is cast entirely from monolithic copper imported from Australia with 4000 components, of which the heaviest is 1,4 tons and is perfectly installed on the top of Yen Son. The artisans have painstakingly assembled about 6000 extremely complex bronze details, carefully calculated, carefully measured, edited every glass to ensure aesthetics and merge with the old temple structure.

Sculpture bearing bold artistic architecture of the Tran dynasty. The patterns and motifs on the head of the knife, the roof pedestal, the crossbar. The vertical beams are all molded in the shape of a dragon's head, with a winding cloud pattern. The roof of the pagoda is curved up to the sky like lotus petals blooming in the floating clouds.

On both sides of the pagoda, there are stands for hanging bells and bells. Behind the temple is the monk's house for the monks to stay and take care of the Buddhist affairs of the temple. It can be said that this is a rare architecture, classified as unique in Buddhist architecture in the world.

Due to its special position, lying on the top of a precarious and dangerous mountain, white clouds cover the roof of the pagoda all year round, covering the whole way up, looking like soft, fragile and flexible green silk.

Visitors to the top of Yen Son seem to be lost in the fairy world, regardless of where is the sky, where is the earth, where is the person. Everywhere you look, you can see the quiet, fuzzy, and virtual surroundings, just hearing the ringing of the bell each time, making people's hearts wander to the horizon, to the distant Buddha realm. The whole pagoda is like a quiet lotus, quietly emitting fragrant fragrance on all sides.

The most convenient way to Dong Yen Tu pagoda

For convenience, visitors should move to the Delta Pagoda by cable car. From above you can see the whole scene of Yen Tu, see the 700-year-old pine forest, watch bamboo forest immense, apricot forest, peach blossom blooming brilliantly. However, to reach the top of the pagoda, you also have to climb a rather steep mountain, and through the old forests, turn the clouds to find the way.

If tourists want to conquer Yen Son peak by themselves, they will have to cross a 6km long mountain road. This will be quite hard and tiring, but it is also an opportunity for visitors to understand the arduous spiritual journey as well as immerse themselves in the footsteps of the Buddha.

And so far, Dong Pagoda has become an immortal symbol of Buddhism, a place to give faith to Buddhist followers. Every year, on the occasion of Tet to spring, tourists from all over the country go on pilgrimage to pray, worship, find the Buddha land, find peace, serenity and peace for the soul. 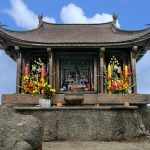 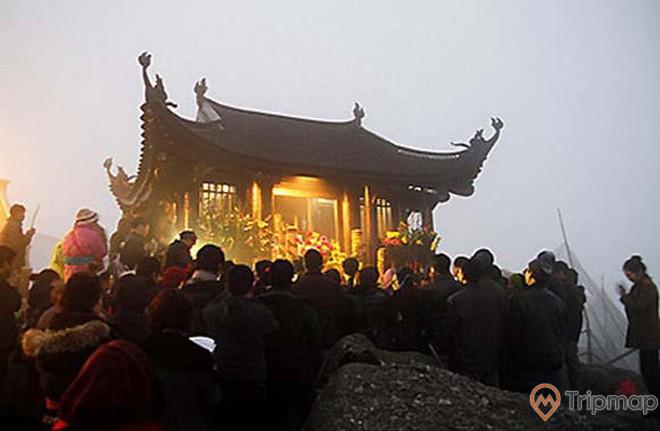 Due to its special position, located on the top of a precarious and dangerous mountain, year-round white clouds cover the roof of the temple, covering the whole way up like soft green silk. 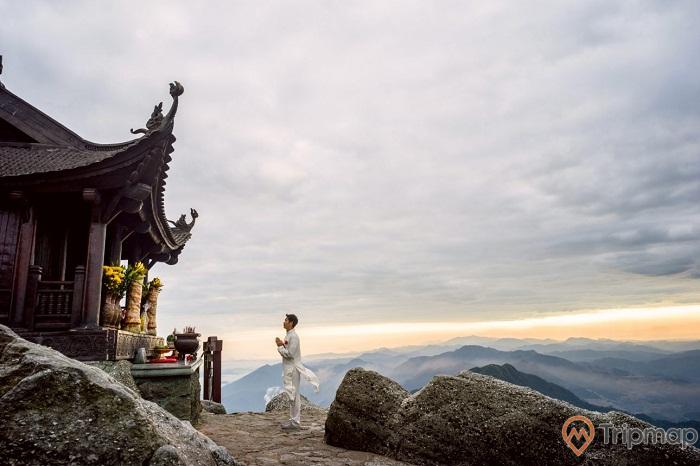 Standing on the Dong Pagoda and wandering among the Buddha realms

The first name is Thien Truc Tu, which implies the supreme position on Yen Tu of Buddha Tathagata. 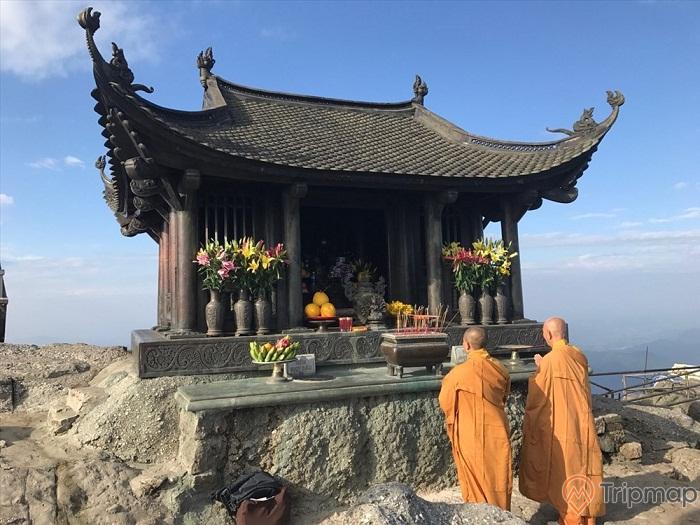 The original Dong Pagoda in the Late Le Dynasty

The pagoda was honored to be recognized by the Vietnam Record Book Center as "Asia's largest bronze temple on top of a mountain". 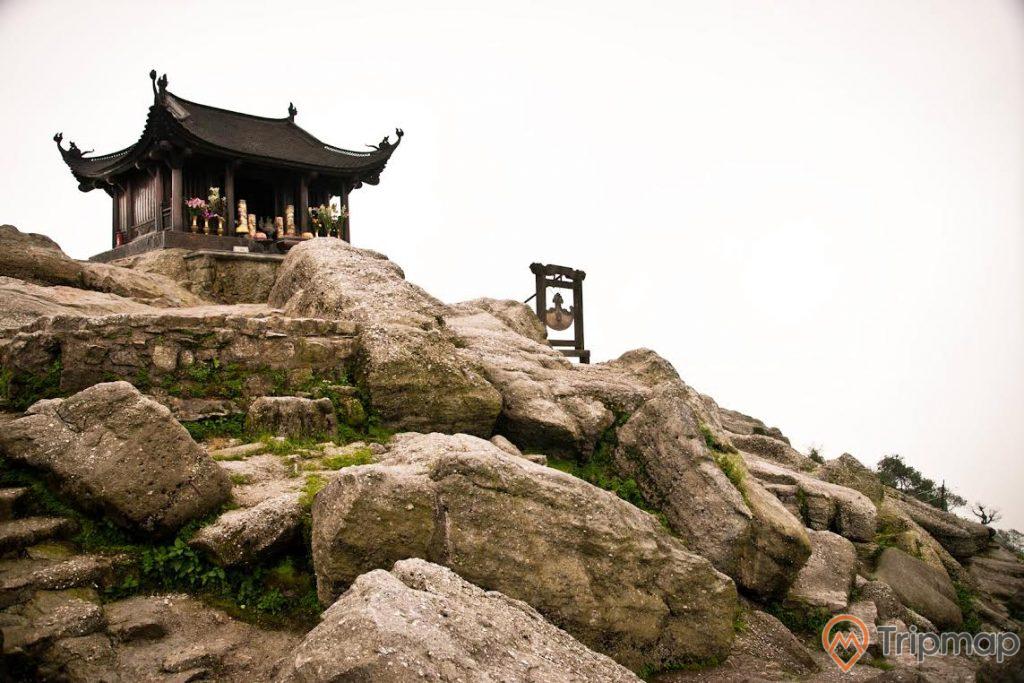 Dong Pagoda from a different perspective 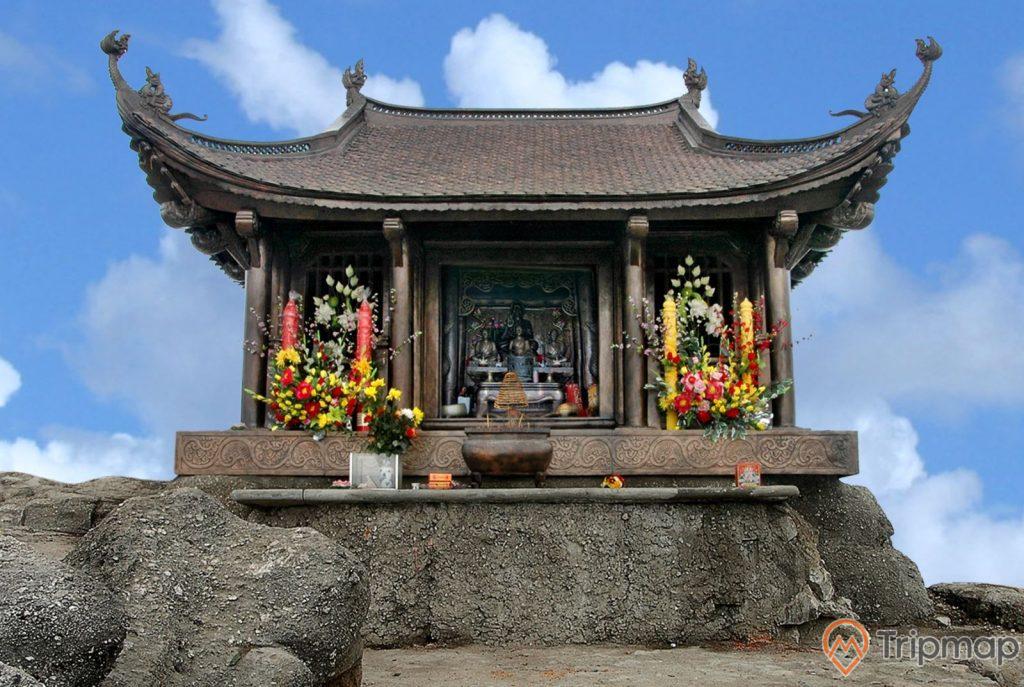 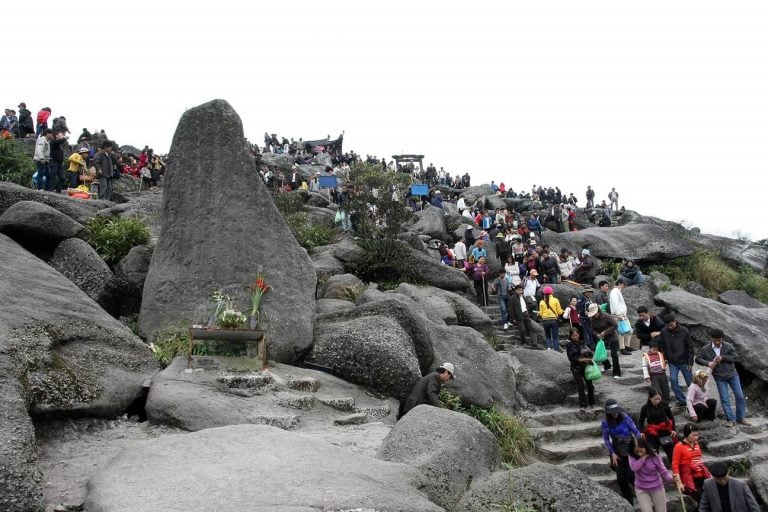 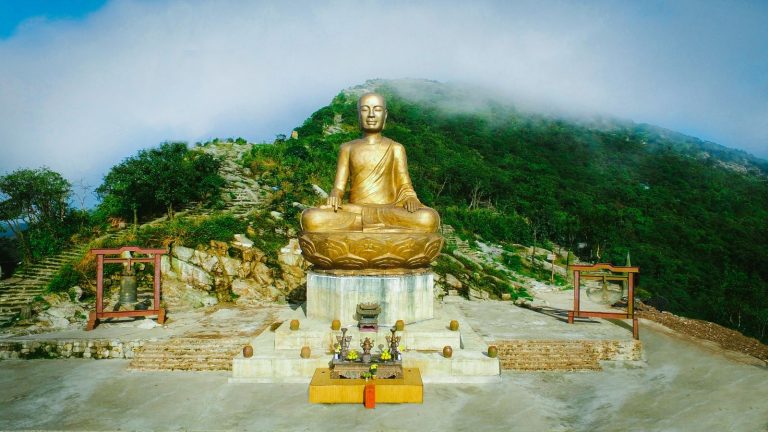 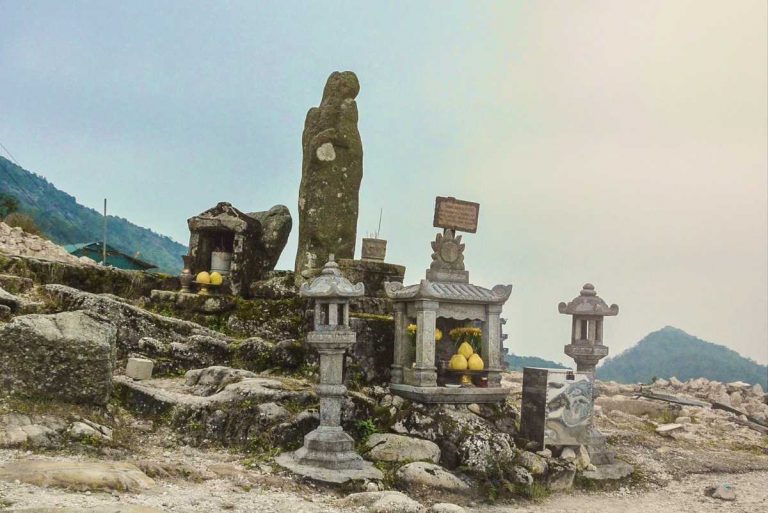 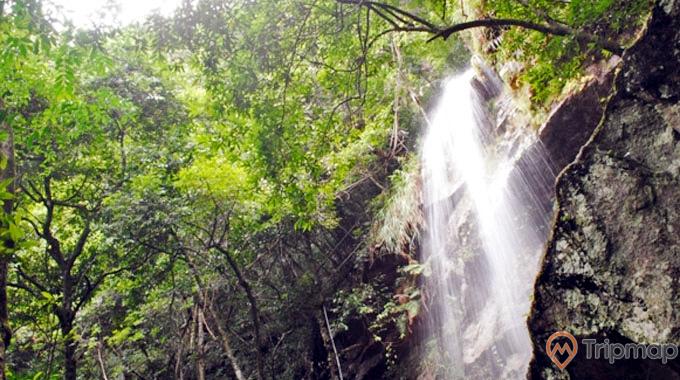 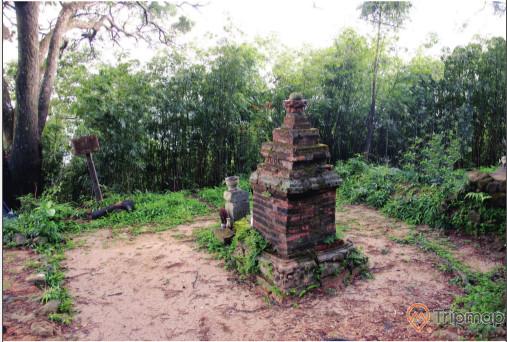 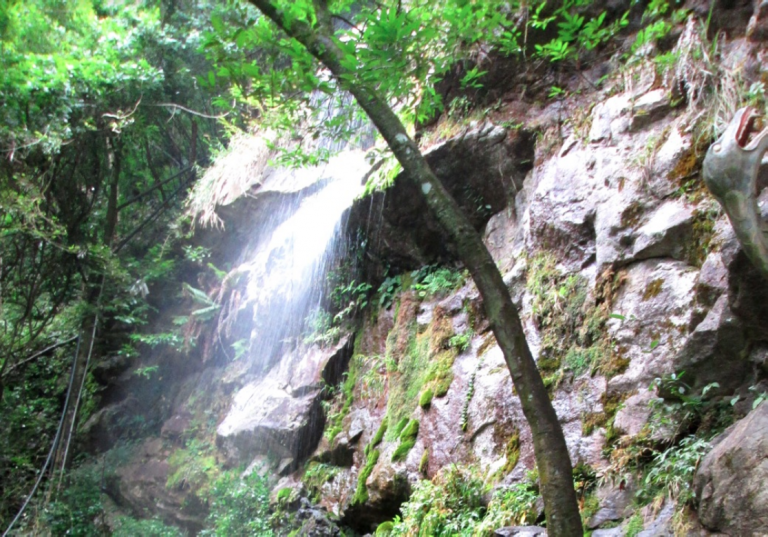 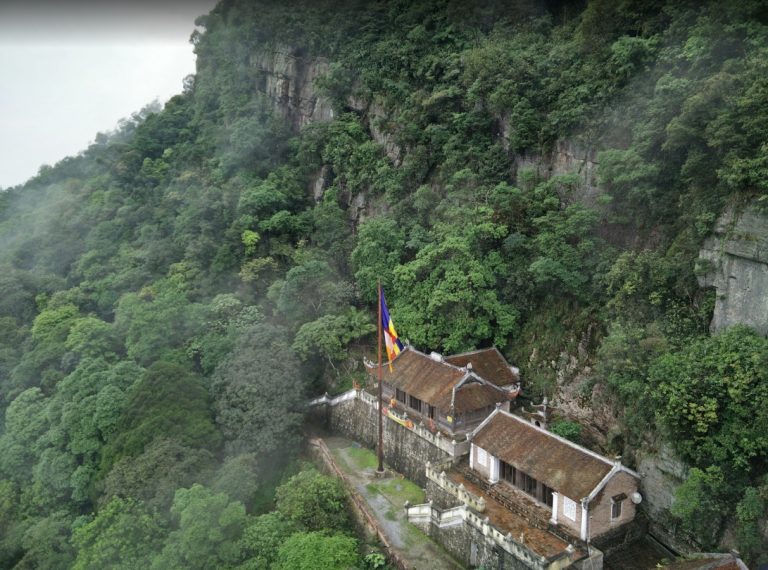 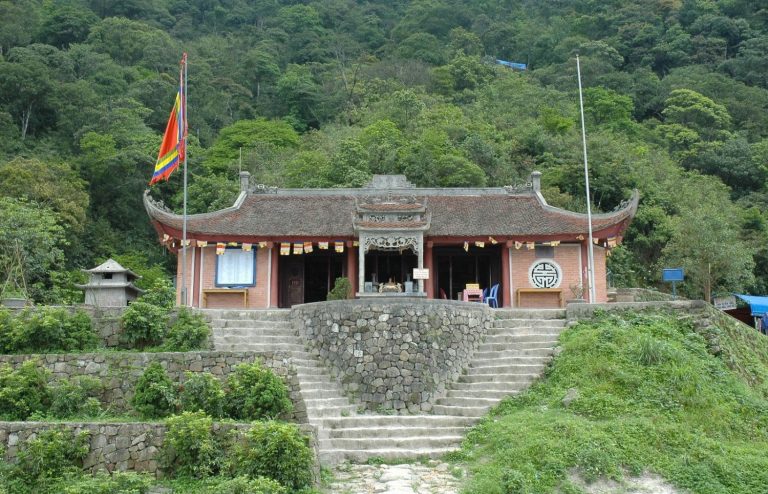 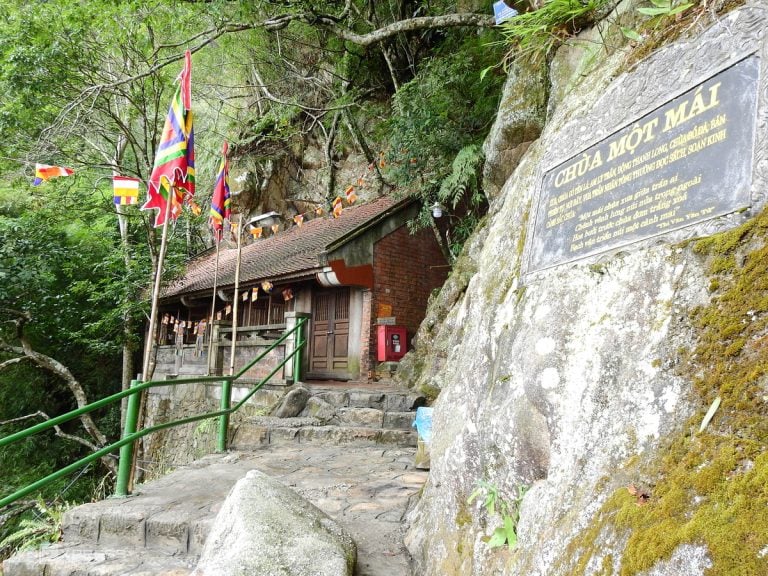 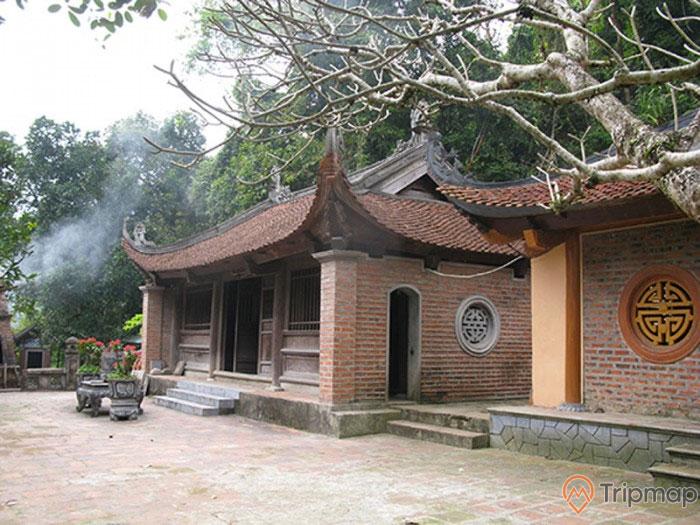 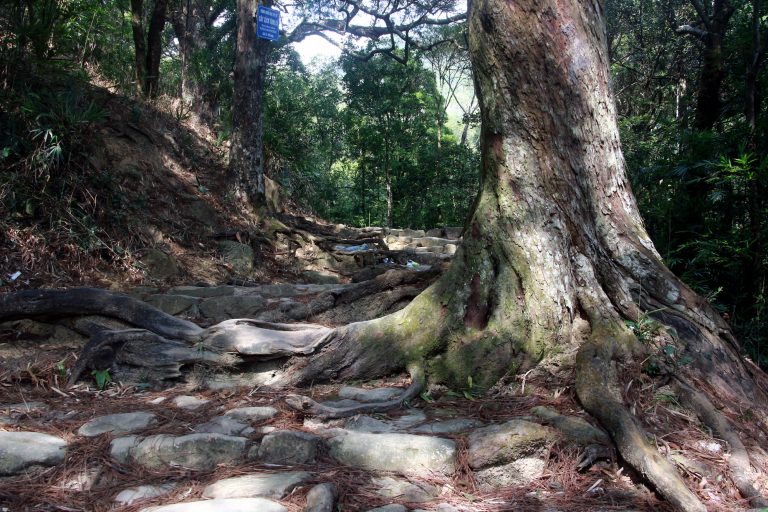 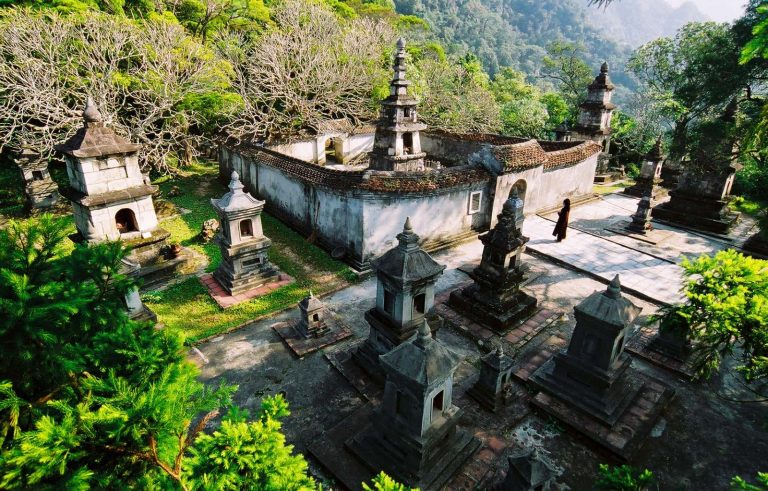